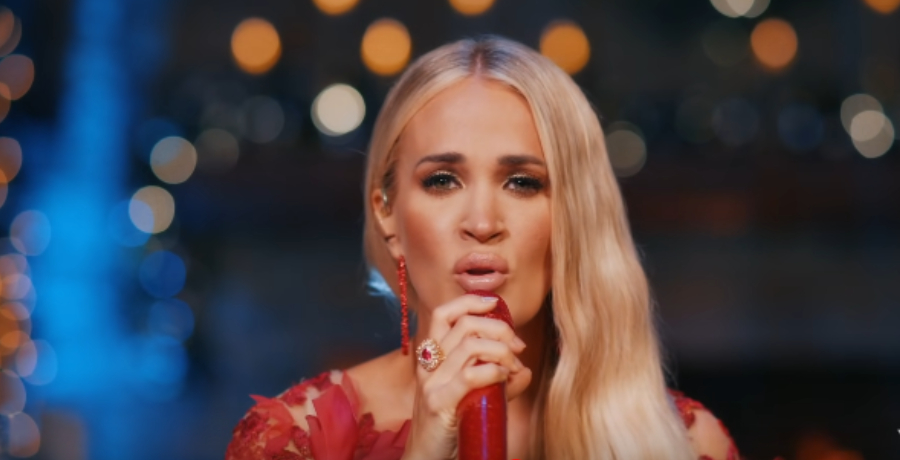 Carrie Underwood glows in an elegant one-shoulder gown. The country singer had fans raving about her latest Grand Ole Opry look. The American Idol alum has been changing up her looks lately. Fans didn’t expect her to wear a glittery suit to the 2022 People’s Choice Awards, where she won big.

Earlier this month, Carrie returned to Nashville’s iconic stage. She attended a recent event at the Grand Ole Opry for her latest performance. Carrie made fans do another double-take with her latest gown. It was nothing like the princess gowns she usually wears. Keep reading to learn more and see the photos for yourself.

Joins the “Opry Loves the 90s”

As part of a special event, Carrie Underwood joined her fellow country artists to celebrate the ’90s, which spawned many greats. A week ago, she took to Instagram to post two new photos of herself wearing an elegant one-shoulder black gown with a gold floral print. She kept the rest of her look simple.

Carrie Underwood wore her blonde hair in a chic wavy updo with whisps flying around her face. She also wore drop earrings. The songstress glowed on the Opry stage. The first one shows her walking onto the stage with a microphone in her hand. In the next photo, she belts out a tune.

“A night at the @opry is always a great night!!! ☺️☺️☺️❤️❤️❤️” Carrie Underwood wrote in her Instagram post.

Fans took to the comment section to share their thoughts. Most of them were fixated on her gown rather than her performance. Her latest Ole Opry look had everyone talking.

When Carrie Underwood made her Opry debut

Carrie Underwood made her Opry debut in 2005. It happened shortly after she won Idol. In 2008, Carrie was inducted into the Opry on her birthday. She’s been showing up to the venue on an almost regular basis.

Earlier this year, Carrie Underwood had fans buzzing when she stepped out onto the big stage in a beautiful purple gown. During that performance, she honored the late Patty Loveless. She will return to Las Vegas in 2023 as part of her ongoing residency. For now, she’s still part of her 43-stop Denim & Rhinestones Tour where fans can check out some of her show-stopping looks.

What are your thoughts on Carrie Underwood’s elegant one-shoulder gown? Do you agree that she’s glowing? Which Opry gown of hers is your favorite? Sound off below in the comment section.