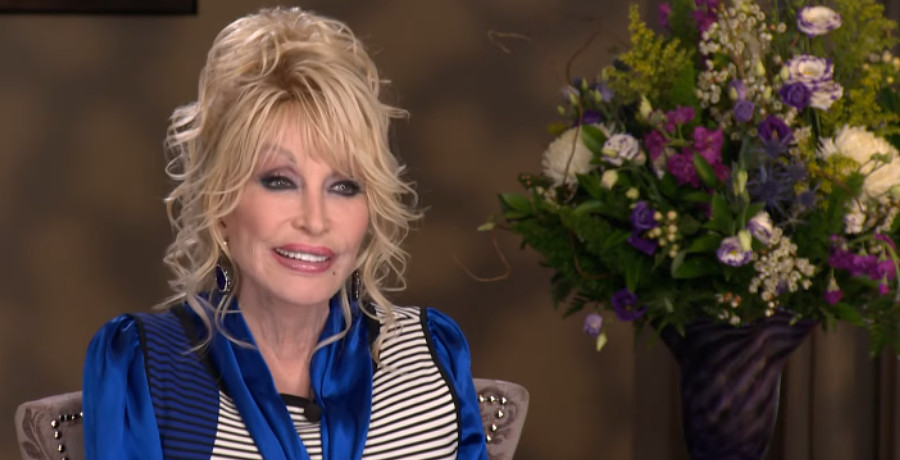 Just yesterday, January 19, Dolly Parton marked her remarkable 77th year. Of course, the Guinness World Record honoree, Carnegie medalist, and most recently, the recipient named by Amazon founder, Jeff Bezos to spread around $100 million of his fortune to her choices of charities and initiatives doing the most good doesn’t do anything small.  There’s no rocking chair in Dolly Parton’s near future. In fact, this year is already busier for the music marvel than a fox in the hen house, and that’s just how she likes it.

On CBS Mornings, Dolly Parton took a few minutes to talk with co-anchors Tony Dokoupil and Nate Burleson about her busy year ahead. From stirring new things up in the kitchen to the recording studio and the screen, Dolly defies the calendar and her creativity stays ageless.

As it happens, Dolly Parton dropped her anthological greatest hits collection, Diamonds and Rhinestones, just in time to be a holiday treasure. Consistently, Dolly sees her songwriting as a gift from God, and this year, she decided “I’d just give the world a little gift,” just like every song she writes.

“It’s a song I kinda dreamed,” Dolly Parton declares of Don’t Make Me Have To Come Down There. The honest, hope-filled ballad embraces the image of God as a loving father, who confronts his children in truth about their misbehavior. Assuredly, as a child, Parton grew to understand the price of disobedience by a strict father. At the same time, Dolly Parton never lost admiration for her father’s business savvy to help his family stay alive, nor his ceaseless work ethic.

Speaking of a strict father, the new song from Dolly Parton has a focus on consequences and accountability and the divine boss is “on my last nerve.” “I gave you a book– you didn’t read it. I gave you my Word– you didn’t heed it,” caution the lyrics. Later in the verses, the holy Father wonders if “I should get my Bible belt and whip you into shape,” in a serious but slightly playful Dolly Parton twist. Another delight of the song is the play of male and female four-part harmony singing in the ballad– a sure bet to draw listeners back for more.

“I know kind of about what Southern people like,” Dolly Parton self-effacingly describes to her interviewers. “You got to have some biscuits, you got to have some sweet cornbread, and those fudgy brownies” the business empress asserts. Accordingly, sweet cornbread, biscuits, and two new varieties of brownies join the Dolly Parton prepared mix collection by the end of the month. Naturally, they are expected to sell out in a flash.

Country Music Alley covered Dolly’s food foray with Jeni’s Splendid Ice Cream in March of 2021. For certain, whether it’s covered in sprinkles or pure comfort food, Dolly Parton knows more than a thing or two about everything tasty.

What does it take to play Dolly Parton?

Just for good measure, Tony and Nate admitted to tasting the new brownies produced from Dolly Parton’s mix, simply as part of quality control. The guys also asked about Dolly’s decision on dividing the dollars she was gifted by Jeff Bezos. Dolly confessed that she bought “a couple of tickets” for the big lottery going the day she got news of the philanthropic choice. When the call came from Bezos, however, Dolly realized she had won a real lottery for so many causes she holds dear.

“You can believe that I’m gonna put it to good use,” Dolly Parton pledges, knowing that “a lot of good things can be done with that amount of money.”

Believe it or not, great movies come from great scripts, too. Rumors are swirling that the script for a Dolly Parton biopic is one of the best-unproduced scripts around Tinseltown, as Tony Dokoupil duly notes.

Far beyond the physical

As far as lead actresses to play Dolly Parton, the lady herself doesn’t name one in particular. In contrast, she details that “she’d need to have my spirit and my personality and– a lot of that fire,” Parton asserts. “And she’d need some boobs, whether they were real or homemade,” Dolly marvelously concludes. No matter the number of talented thespians who audition for the role, fans forever know that only Dolly can be Dolly.

Finally, in some closing advice to aspiring young stars, Dolly admonishes them to “make your desire greater than your fear” and follow the heart and the dream above all.

By the way, fans still look forward to the release of Dolly Parton’s rock album in the fall,  and certainly more irons in her fire by then.

At 77, Dolly Parton lives by the Lord, and her own advice, led by the desires of her heart.

Country Music Alley keeps every fan in tune with the latest Dolly Parton projects and the latest from your favorite country luminaries– feel the light, the love, and the fun!