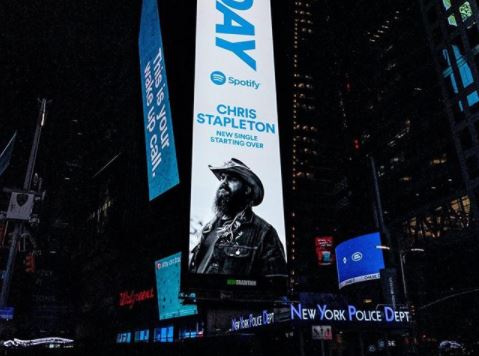 Chris Stapleton is a country music artist who craves the stage but certainly not the glare of publicity.  The singer-songwriter whose last three albums have reigned at the top of the charts across rock and country has just released the song, “Starting Over,” from his new album, due for release in November.

In a rare interview concession, Chris Stapleton talked across the miles with Anthony Mason from CBS This Morning on September 1.  The five-time Grammy winner got personal about keeping perspective in these pandemic times and still staying creative away from the live stage that every artist craves so deeply.

Putting doubts aside, Chris Stapleton pursues his passion for music

Chris Stapleton, like Keith Urban, Tim McGraw, and Jason Isbell, among many more top-tier country music artists, has pushed forward with releasing new music in the unprecedented times of a global pandemic.  Music is most assuredly medicine for the soul, but the decision doesn’t always come easily.

“I think everybody has doubts in everything that they’re doing in every moment right now,” Stapleton agrees.

The song-crafter who extols the joys of the simple life and things money can’t buy in songs like “Millionaire” and “A Simple Song” has shared quarantine with his wife, Morgane, and their five children. Their youngest son arrived just after Mother’s Day last year.  Children are blessings indeed, and this family fiercely guards their privacy for the sake of their children.

Chris Stapleton related how he giggled for almost 20 minutes at the news of having his twin boys, Macon and Samuel.  Only seven months after their arrival, news came that he and Morgan were expecting a fifth child.  They have not divulged the name of that precious son just yet.  “They’re children, and they deserve to be children,” says their dad of his stance on protectiveness in a 2018 interview.

Morgane and Chris Stapleton have certainly been hands-on parents through the pandemic, and Stapleton assures that anyone “who says they haven’t reached a near-breaking point mentally in these times– I think they’re probably lying to you,” he insists with a smile.

As it turns out, Morgane got the perfect birthday present to help Chris Stapleton keep everything in perspective.

New pedals and a refreshing perspective from Chris Stapleton

Chris Stapleton gave an answer that Morgane and many of his loyal fans might not expect when his wife asked about his birthday gift in April.  He told her he wanted a mountain bike.  When the stresses get high, Chris takes off through the woods.  “It has helped tremendously in a centering kinda way,” the singer-songwriter confirmed.

Taking a listen to “Starting Over” will bring listeners a much-needed mental vacation.  “Nobody wins afraid of losing,” the song reminds, “the hard roads are the ones worth choosing.”

The chorus soars “I can be your lucky penny/You can be my four-leaf clover– starting over.”  A time of renewal and starting over will come.   The children who come through these times of medical and social upheaval will become stronger and more resilient than ever, and they will do it together.

Chris Stapleton can draw from a gold mine of great music

Anthony Mason was only half-teasing when he asked the songwriter how many songs there might be hidden away in his “chest” under the bed.   Chris Stapleton gave a very definite answer.   “There’s probably 1000 songs,” Stapleton revealed, hardly blinking.

Before recording, “Traveller,” which became the best-selling country album of the decade, Chris Stapleton was among the most sought-after songwriters in Nashville. Nonetheless, as he writes himself, there’s a thousand songs that come before one elusive hit.  The hits did come from “From A Room” Volumes I and II, and so did more glistening country music hardware.

Chris returned to RCA Studio A for “Starting Over,” and playfully teases that while he and Dave Cobb are the producers on the album, Morgane is “the producer of my life,” and “she knows when the magic is in a song.”

Far beyond the magic of conjuring a hit, the tenor of some of the music on the new album takes a very serious tone. “Watch You Burn” is both a gut-reaction and a heartfelt plea in response to the 2017 Las Vegas shooting at a country music festival.

Chris Stapleton has also been transformed by the Black Lives Matter protests and the songwriter contends that “we can all do better” as country music artists and as an industry. “We all need to listen more,” he reiterates.  The artist came to grips with the notion that “the country I thought we were living in– it’s a myth.” He knows there’s a lot more to do to make things better and he’s willing to start now.

Chris Stapleton longs for “the energy of people taking music and giving it back to you,” that can only happen from the live stage experience.  For now, though, this father, husband, and heralded country music star is tossing the shiny new songs of “Starting Over” to his fans on November 13.  This year, we all could use an early Christmas gift.