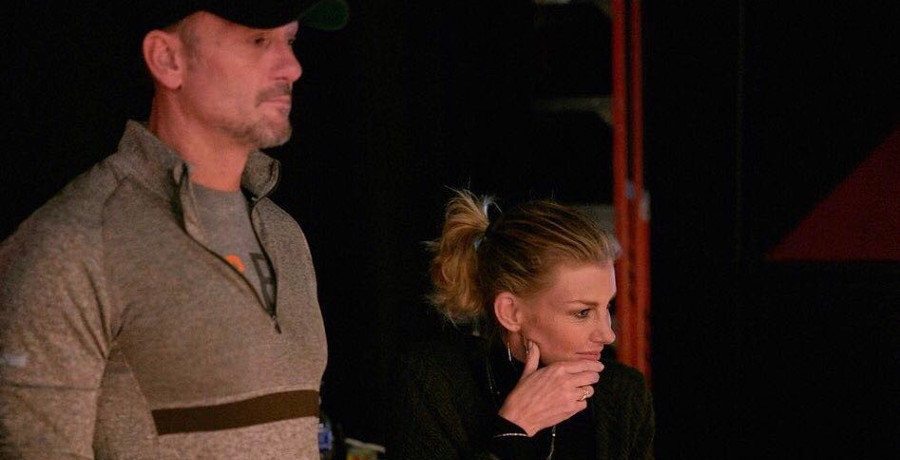 Tim McGraw claims he’s never even seen Four Christmases, the 2008 “dramedy” in which he stars.  The country music superstar portrays one of Vince Vaughn’s cordial but tormenting brothers during the holiday visits to all four sets of divorced parents during Christmas.  The role of Dallas gets more than rough-and-tumble between Tim McGraw and Vaughn’s character, Brad. Reese Witherspoon isn’t much help beyond sympathetic looks as Brad’s girlfriend, Kate. Dallas is also upset when Brad ruins the Santa Claus magic for his kids.

There is some high-climbing in the flick, when the grown boys’ dad, played by Robert Duvall. He decides to forgo the professional installation of the satellite dish from Brad and Kate and put it up on the roof himself—with the help of his sons.  And, Tim McGraw did some high-climbing of his own at home, all for the sake of a beautiful family Christmas tree, as the UK’s Daily Mail and ET Canada per MSN both noted.  Fortunately, the mood at the McGraw home was much more calm and bright.  Still, Decorator-in-Chief Tim McGraw was definitely concerned that he might not even have a stable to sleep in if his lovely wife, Faith Hill, got her say.

Tim McGraw and Faith Hill celebrated their 24th wedding anniversary in October.   The stellar duo filled venues to the rafters before they united as one. Their magic on stage during Tim’s Spontaneous Combustion tour was irrepressible.  Fans felt it immediately and so did the couple.  It’s hardly surprising that McGraw is still celebrating stratospheric and steadfast love in songs like “Chevy Spaceship” and “Da*n Sure Do” from his album, Here On Earth, released in August.

It may not be a spaceship, but the ladder took Tim McGraw high enough on his Christmas decorating adventure.  He’s about three rungs down from the top of the ladder. It’s abundantly clear that this dad and dutiful husband is danged determined to get to the tippy-top of the family tree.  Tim chooses typical “at-home style,” wearing a navy sweatshirt, gray sweatpants, and a familiar backward baseball cap.  The tree looks loaded with shimmer, with gold garland and baubles from top to bottom, surely all hung with care from the official tree curator.  Tim McGraw turned 53 in May, but you can’t take the urge to climb a tree out of a boy, especially at Christmas.

Any Tim McGraw fans who still need a little something to give as a Secret Santa don’t have to look far.  McGraw Machine Hits 2013-2019 pulls together just the most recent of the singer’s chart-toppers, along with two surprising fresh tracks.  Music is a great fit for a stocking or under the tree.

A: Santa's lead flying reindeer
B: wife trying to get rid of me before Christmas pic.twitter.com/Cvmha58rVM

After a quarter-century of life and love together, Tim McGraw and Faith Hill have certainly forged an impeccable intuition with one another, along with their lasting love.  When Tim posted his tree-trimming fun on Twitter, he nailed the probable options laid out for his future but for the holidays.

“A. Santa’s lead flying reindeer,” McGraw opened his Tweet, before offering “B. Wife trying to get rid of me before Christmas.”

Judging by his willingness to stretch himself, literally, to the limits, Tim McGraw doesn’t mind Christmas tree duty, but his wife probably would prefer the regular-sized ladder over the one used to load the space station.  Nobody wants to risk a trip to the emergency room on Christmas Eve.

Christmas may feel “a little different” this year in more ways than one.  Like millions of other families, the McGraw-Hill brood is doing the best they can under pandemic conditions, and holding onto hope faith for the coming year.  They also are sending their youngest daughter, Audrey, 19, out into the world to fly into her future.

Mom and dad both shared beautiful birthday love for their girl.  Tim McGraw declared “I admire you,” and Faith Hill cherished the home videos of Audrey singing and acting out favorite Beatles’ songs from Across the Universe. Gracie, Maggie, and Audrey McGraw are always welcomed and embraced at the family table, no matter where life carries them.  This Christmas will be no different, except for being more filled with love.

Tim McGraw assured that “we do a big tree,” when he described the family Christmas festivities.  Now, everyone knows how much he means it.  Merry Christmas, McGraw family!

Country Music Alley will fill you in on all the Christmas fun with your favorite country music stars.  Check-in often!