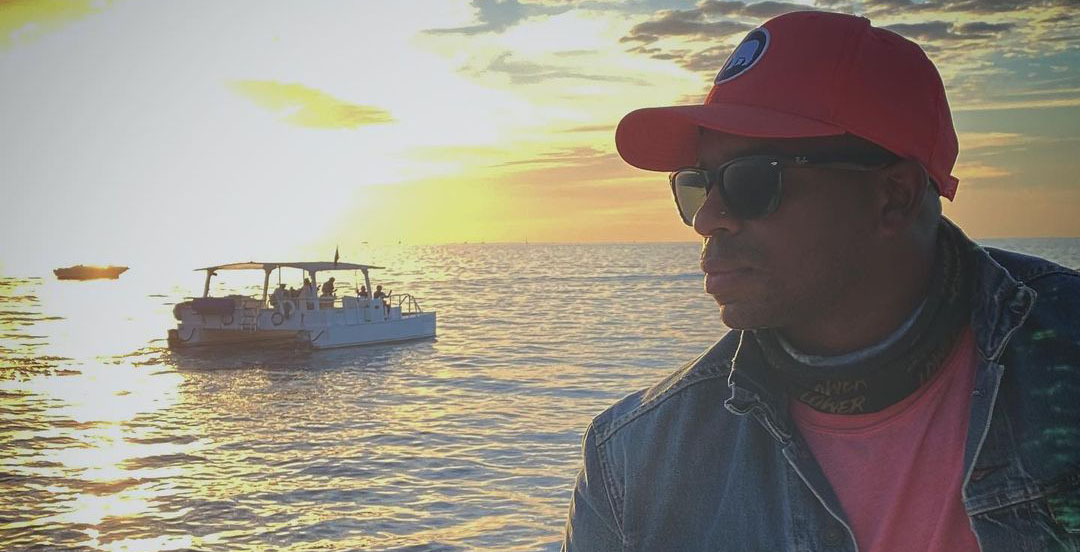 It’s not hard to figure out why the buoyant and rising Country star, Jimmie Allen will do just about anything for the Today show.  Just two years ago, the “Best Shot” singer got the best, big shot of his career on the morning show.  Since that national stage splash, life hasn’t been the same for Jimmie Allen.

Even the Grinchiest of Christmas Scrooges had to break a smile this morning Jimmie Allen took center stage (from a distance, of course) on Today.  Jimmie performed his soon-to-be holiday classic, “What Does Christmas Mean.”  His performance is alongside Louis York and The Shindellas.  The new song is no sorrowful, slow “Blue Christmas.” No disrespect to Tim McGraw, who does his own rendition of that gem recently. It’s a sure bet that Jimmie Allen and this crew can get anyone in the pandemic holiday doldrums up off the couch and dancing.

“Hey, Hoda and Jenna!” Jimmie Allen opened the performance of his first-ever Christmas song.  Never mind that Jenna Bush Hager is off this week from her fourth-hour of Today duties.  The singer’s smile was warm enough to melt the butter on Christmas morning waffles.

“Play them keys, Chuck!” Jimmie Allen exclaimed to signal the start of “What Does Christmas Mean.” The words had barely come out of his mouth before The Shindellas soared into their chorus of “Shoo-bee-doo’s and shimmying in their colorful velvet jumpsuits.

Jimmie Allen struck a dashing form in his camel-colored, wide-brimmed Stetson. Notably, his opening verse of missing his love over the holidays was smooth as silk.  The ladies do a good part of the vocal heavy lifting on this one. However, it wouldn’t be the same without Allen’s energy and positive spirit.  Louis York is actually a duo of mega-talented producers, vocalists, and songwriters– Claude Kelly and Chuck Harmony.  The two have moved their center of operations to Nashville.  The dynamic team has already branched out from music to ballet in Music City.

Claude Kelly took the next verse, while Chuck Harmony stayed solid on the keyboards.  The vocal handoffs between Jimmie Allen, Kelly, and The Shindellas were delightful and flawless.  This yearning, bouncy ballad wishing for Santa to bring the singer’s sweet baby home is better than any candy cane or eggnog for Christmas cheer.  Country soul, joyful hip-hop, and old-fashioned Motown-style moves and harmony all come together on this welcome number.

Charley Pride was much more than a legend.

The last time most fans saw Jimmie Allen, the “Make Me Want To” platinum hitmaker was right where he wanted to be. That’s next to Charley Pride, singing with his gracious mentor. Allen also presents Pride with the Willie Nelson Lifetime Achievement Award at the November 11 CMA Awards ceremony.  Just a month later, the country music world and beyond reeled in stunned disbelief when Pride passed away of COVID-19 complications.  The Country Music Association maintains that the production took every precaution and that Charley Pride tested negative before and after travel and his CMA performance.  Questions remain about the matter of how Country’s most revered Black artist could be stricken so quickly after an in-person and indoor gathering. Jimmie Allen has no question that Charley Pride was more than a legend and a mentor.

Charley Pride mattered far too much to Jimmie Allen to be summed up in a social media blurb.  In a touching YouTube video last week, Allen openly elaborated for almost 20 minutes on the grace and courage of the man who was “like a grandfather to me.” Jimmie recalled Charley’s uncanny ability to know the birth dates of fans and friends alike.  Their many conversations about life will be part of Jimmie Allen forever.

Showing his real-life heart of gold

One of the projects that Charley Pride, Darius Rucker, and Jimmie Allen last collaborated on was the music for the short film, The Bettie James Picture.  Allen wrote the cinematic effort and Sam Aldrich directed the film.

Through the music of Bettie James, Jimmie Allen portrays a working-class citizen who copes with loss, dreams, and hope.  The song, “Why Things Happen” features the unique partnership between Allen, Rucker, and Pride.  Don’t miss the full soundtrack– it truly makes an impact.

Sadly, Allen doesn’t have to go back far to remember his real life as a struggling artist.  During his conversation in the CMA Awards lead-up special, Country Strong, the empathetic Allen opened up about taking out a “crazy loan” to continue paying his band during the shutdown impacting all live musical performances.  No exact amounts were ever mentioned but Jimmie Allen had a positive spin, as always. ”The good news is, I have 45 years to pay it back!” Allen exclaimed.

It takes a rare man to see the blessings of giving in these very unusual times.  Jimmie Allen knows the healing from a smile and a sense of humanity.  Those gifts last longer in the soul than any present under a tree.