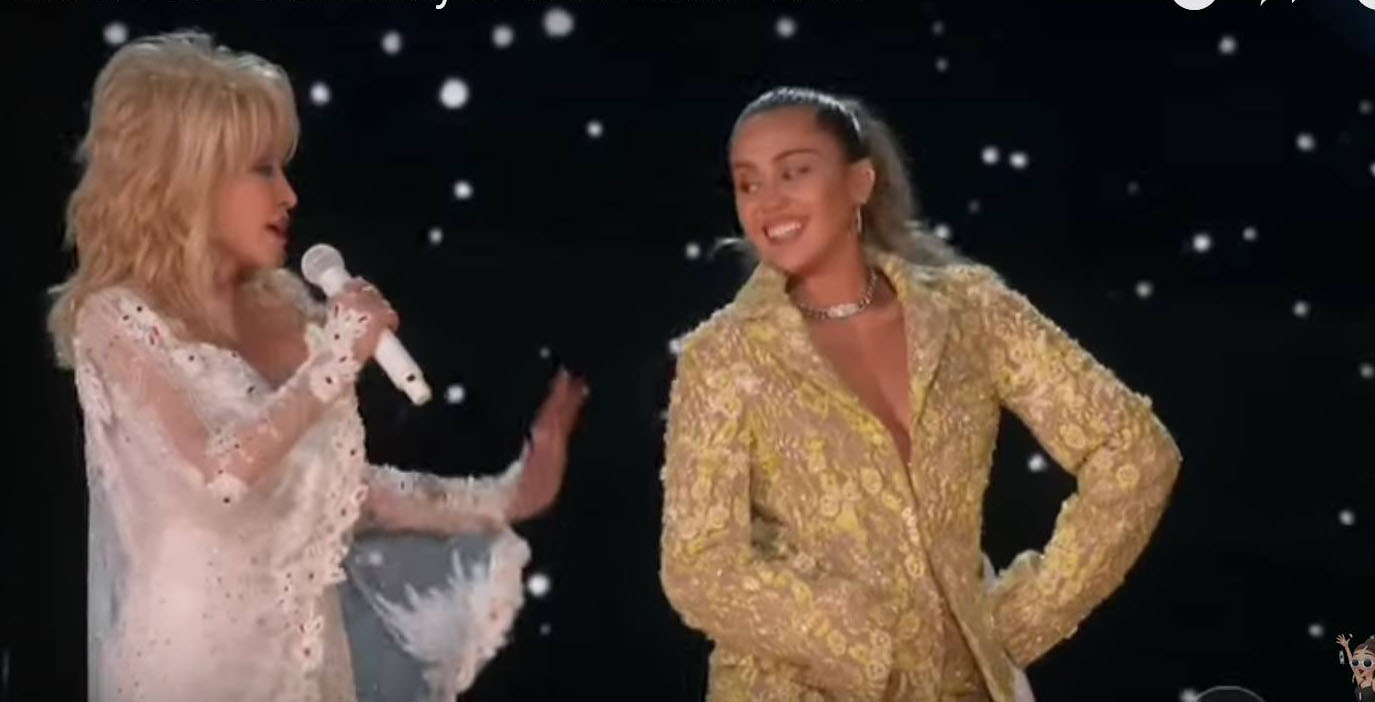 Miley Cyrus more than adores her godmother, Dolly Parton.  There’s virtually nothing that the young woman who transitioned from Disney’s Hannah Montana into her current rocker identity on her latest album, Plastic Hearts, wouldn’t do to please or honor her beloved “Aunt Dolly.”

Miley Cyrus and Dolly Parton have more in common than being “like family” to each other.  Both strong women know that success doesn’t just happen.  The ladies share a work ethic seldom found in the stars of today.  Dolly is up before dawn conducting the business of the day and sending e-mails.  She holds off on phone calls, realizing most of her contacts aren’t awake.  Cyrus articulated “I put my back into it” in her 2019 song, “Mother’s Daughter.”  Countless Dolly Parton classics credit the singer-songwriter’s hardscrabble upbringing in the Smoky Mountains and the constant support and creativity of her parents for molding the artist she is.

Neither Dolly Parton, nor Miley Cyrus mind sharing fans, and both singer-songwriters spent Christmas at home this year.  Miley looked forward to tossing a football with her dad, Billy Ray.  Parton shared how her traditions of food, family, and fun would hopefully carry on this year, on a safe and smaller scale.

For one particular Dolly Parton project, though, Miley Cyrus had to get busy back in the summer. Cover Media via MSN confirmed how a duet with Miley Cyrus was more than just another holiday song.  A plea from the heart of the country music icon was impossible for her goddaughter to ignore.

Dolly Parton lovingly refers to Miley Cyrus as her “little fairy goddaughter.” She even used the phrase a few weeks ago when Cyrus glowingly gave her the Billboard Hitmaker Award for her lifetime of accomplishments across music genres.  In turn, the doting goddaughter detailed the marvelous history of accomplishments from her “precious fairy godmother.”  Candid as ever, Cyrus said that anyone who didn’t like Dolly Parton felt that way “only because they love Dolly Parton.” Of course, Miley also mentioned Dolly’s “customized, rhinestone-bedazzled belt” before Parton’s remarks.

Back in the summer, Dolly Parton was working out the logistics of the duets for A Holly Dolly Christmas.  This collaboration between Miley and Dolly was not just another song under the country music queen’s belt– it was an opportunity of a lifetime and part of a lifetime legacy.

“She had to sing on this Christmas album,” Dolly implores.  At the time, Parton knew that Miley Cyrus was working on her own project, but this time, the godmother used her family privilege.  She didn’t ask the “Prisoner” singer to put the song out herself as a single, relating that “I know you got your own thing.” Dolly Parton pleaded for Miley and her dad to sing with her on the album, however, “because you’re like family” and because “I’m probably never going to do another Christmas album,” Christmas lover Parton asserted.

Naturally, Miley and her dad graciously obliged.  The “Midnight Sky” singer explained to Jimmy Fallon how she was practicing the heartfelt verses of “Christmas Is” from her kitchen in July. She sang through her repertoire of Christmas carols to get her vocal cords in shape.  Cyrus underwent vocal cord surgery in late 2019.  Nonetheless, Miley Cyrus will not disappoint her godmother.

This pandemic Christmas required drastic changes in plans for everyone, and Dolly Parton is no exception.  The holiday extravaganza that Parton envisioned for her chart-topping Christmas collection couldn’t happen under restrictions necessary due to the surging spike in the virus.

Still, while the singer doesn’t entertain another Christmas album anytime soon, she has no problem with assembling all her duet partners, including Miley Cyrus, Billy Ray Cyrus, Michael Buble, old friend, Willie Nelson, and her little brother, Randy Parton, for a full-on Christmas special next year.  For now, safety has to come first for the 74-year-old sparkler and everyone else.  When Dolly Parton calls, people come.  There will be plenty of Christmas spirit for the revived version of A Holly Dolly Christmas next year, with “some new and additional things” from Dolly Parton, friends, and family to decorate the broadcast event.

Is Miley Cyrus out to make Santa’s naughty list?

The days are counting down to New Year’s 2021.  Miley Cyrus already has big plans for the evening, joining Jennifer Lopez, Ciara, Cyndi Lauper, and more for Dick Clark’s New Year’s Rockin’ Eve with Ryan Seacrest on ABC.  There’s little doubt that Miley will pour on the passion in her harder-edged tunes, even under socially-distant circumstances.  Often, her sets can be surprising, because she throws in “Jolene” or a softer acoustic version of her hits.  For New Year’s Eve and a new album, expect the tougher tunes with themes heavy on freedom.

Miley Cyrus has always been open about her life journey, its lessons, and how she’s still learning. She lays out personal truths in her songs, and she’s not shy about showing her body.  CinemaBlend described, without fully displaying, some racy holiday images of Santa Miley, one minus a top at all.  She’s been teasing lately that she’d like to kiss Harry Styles.  Is she trying to turn his head? Who knows? She’s having fun, Miley-style.

What fans know about Miley Cyrus and Dolly Parton is that despite very different styles, their hearts are cut from the same cloth.  Look forward to seeing the fairy godmother and goddaughter duet next Christmas.