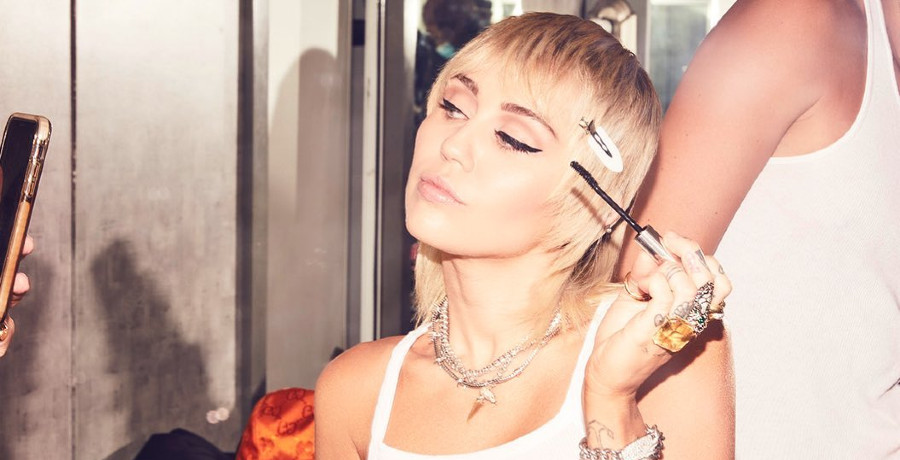 Whether it’s her life, love, or music, Miley Cyrus doesn’t do anything halfway.  Maybe that’s the perfect reason why the multitalented and unabashedly honest Miley took to a big stage of her own before the kickoff of Super Bowl LV.  Miley Cyrus owned the TikTok Tailgate stage prior to the start of football’s biggest game, and just like the teams, she brought along some friends to make the day more special.  Duets with Billy Idol and Joan Jett brought the sizzle even more than the Tampa sun, with Cyrus pulsating with passion.

One particular song brings Miley Cyrus to tears, and it did during this performance, too.  Her open confession about her heart on her sleeve only drew her that much closer to every fan watching.

It’s a ‘Wedding’ day for Billy Idol and Miley Cyrus

Miley Cyrus served up a hit-rich set of her own from Plastic Hearts, including “Edge of Midnight” and “High.”  Her latest, relentless rocking album is a departure from her warm, more rootsy songs from 2017’s Younger Now.  Cyrus suffered the loss of divorce, the loss of her home, and the loss of dear family members since then.  The sensitive artist went through vocal cord surgery and lost her beloved rescue dog, Mary Jane, last month.

As MSN notes, this was not just “the first show I’ve done in about a year” as Miley Cyrus told the crowd of about 7500 healthcare workers from the front lines. The “We Can’t Stop” singer called out individual names of several of the workers, remarking how “the dedication of his song could never repay you for your services.” Everyone in the US and the world shares that sentiment.  Simply being able to provide some of those who fight for life every day a few minutes of fun and relaxation is a welcome gift.

Miley Cyrus donned a black leather cheerleader outfit as she bounced on stage.  The 28-year-old hasn’t lost a smidge of energy since her real-life cheerleading days.  Billy Idol is 65, so he can’t step quite as quickly, but the punk rock god still strikes those classic notes just fine.  The veteran rocker brought Miley back to making music for herself, as she described of their collaboration.  He joined her on stage for “Night Crawling” from her album.  Cyrus was the perfect hype girl for her hero, singing every word and playfully flirting through every chorus.

Miley’s hot pink foam finger seemed to be leading Billy, along with the crowd. The duo devoured the classic “White Wedding” with a ferocious vengeance, no matter the age difference, and even vamped with the very willing guitarist.  If it was much more than a “nice day for a white wedding,” as the lyrics go.  It was a kick-a** welcome back to the stage for Miley Cyrus.  To this day, Billy Idol hardly misses a show date.

Speaking of never missing a step and staying in peak performance mode, Miley Cyrus recently shares a video of herself on social media.  “The Climb” artist was in full-pace on the treadmill, belting out tunes at full decibels.  Her power is incredible.  She’s never once out of breath.

No one’s got video of Joan Jett on the treadmill, but there’s plenty of footage of the pioneering female ambassador for “girls who rock” through four decades or so of her 62 years.  Miley Cyrus wore full football attire, complete with sparkly pink and black jersey, by the time the Blackhearts frontwoman and Runaways founder came out for “Bad Karma.”   The deep-voiced ladies delighted the crowd for almost 8 minutes.  Cyrus tore into “Bad Reputation,” crediting Jett for all the questions of “What’s wrong with her?” after a Miley show.  Most fans totally understand, and can’t get enough of the diversity and honesty that pours from her honest heart.

The sisters in song were kismet until the last note of “I Hate Myself for Loving You,” which topped off with a crowd sing-along.  The mutual admiration is pure magic and their creative chemistry comes through on Plastic Hearts, in its themes of freedom and independence.

Miley Cyrus and Liam Hemsworth met while making the movie The Last Song in 2010.  For almost a decade, the couple was on-again, off-again, somewhere in between, but never really estranged from each other.  The Australian actor took not only Miley’s heart but that of her family.  By 2017, the two seemed to find that contented place that every pair of hearts hopes for.  Their December 2018 wedding was at the Cyrus family compound in Tennessee, but the wedded bliss didn’t linger.  Hemsworth and Cyrus split after just eight months.  Their divorce was final in 2020.

Fans will recall how Miley Cyrus broke down back in 2013 during a performance of her wrenching ballad, “Wrecking Ball.” Miley Cyrus says that the anthem of consuming love is not even about her former husband.  Nonetheless, he cannot escape being associated with the song that was even spoofed by Kathie Lee Gifford (in a special bodysuit).

Miley Cyrus was on top of a riser when she opened “Wrecking Ball” for the TikTok pregame event.  No matter who the song brings to her heart and mind now, her evident emotions surfaced early. The St. Louis Post-Dispatch confirms how the performance trooper made two attempts at “I came in…” for the main chorus, clearly fighting her tears.

Miley takes off her armor

Her voice gave way completely as she came to the lines “Don’t you ever think I just walked away/I will always want you.” After the song, she explained her powerful emotions.

Miley elaborated how the song is about being “broken and shattered” and how every person’s suffering is different, including “everyone’s threshold of pain.”

Few artists have the openness or courage to reveal such deeply personal feelings.  Miley Cyrus has always dared to be herself, and that choice is a bold decision, to be applauded.  She probably longed to feel the loving arms of her “precious fairy godmother,” Dolly Parton, after the show.  Sadly, only a CGI image of Dolly was in her Super Bowl ad, but the phone, or a fax machine in Dolly’s case, will work in a pinch.  Being real is an asset, and Miley’s got a loving clan in her corner. She never forgets that, just like she never forgets “Jolene” at every show.

How Blake Shelton Beat Out Taylor Swift In 2021
Miranda Lambert Shares A Glimpse Into Her Creative Process
Is Taylor Swift Dropping A Surprise Album This Year?
Gwen Stefani Has A Serious Case Of Puppy Love
Gwen Stefani Fans Want Singer To Stop ‘Filtering’ Her Photos