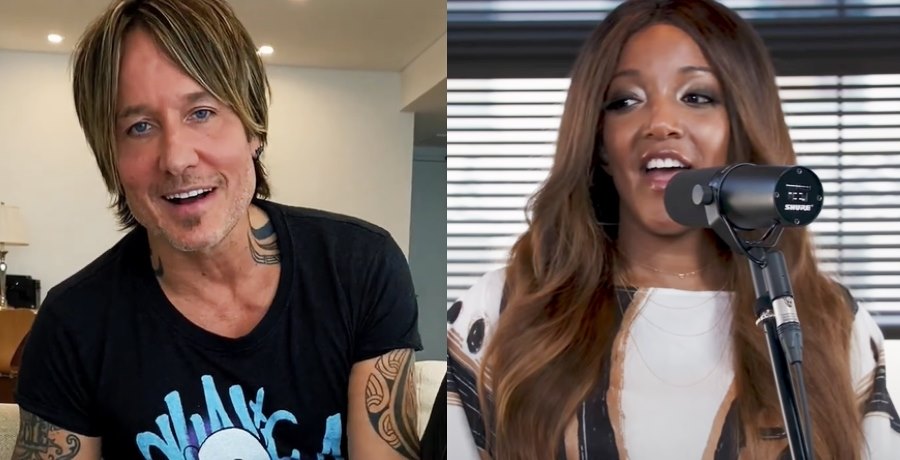 Mickey Guyton and Keith Urban just love making history and music together.  Last September, the country music songstress shook everyone in earshot down to the soul with her performance of “What Are You Gonna Tell Her?” center-stage at the ACM Awards.  The most powerful performance of the evening sparked an awakening in the country music realm.  It seems as though no one had ever heard such a testament of personal truth before.  No one had ever seen a Black woman take the stage as a solo performer at the ACM Awards before, much less proclaim the predicament of female inequality and prejudice.  It was Mickey Guyton’s moment in the spotlight, and she made it matter.

Keith Urban didn’t speak a word to Mickey Guyton following Tim McGraw’s introduction.  Nonetheless, the stalwart and reassuring presence of last year’s ACM Award host proved more than enough support for the then still-expectant mother.  Keith Urban provided exuberant support and spirit to almost every performer through the evening.  His impeccable accompaniment and gazes toward Guyton’s way spoke that he was her fan.

Keith Urban shares the news this morning that he got the hosting nod for the 2021 ACM Awards.  The Country megastar and guitar maestro has 15 glistening ACM Award statues etched with his name. Understandably, no one knows more than Keith that a night of music and fun is always better with a friend.  He makes a call to Mickey Guyton, to ask her to be a co-host, as People and the Associated Press verify.  Let’s just say she gives more than a yes– these two are going to be loads of fun from the podium!

It likely takes an army of coordinators to work out the bicoastal timing of a phone call between Mickey Guyton and Keith Urban, but no one on earth could be cooler or more chill than the “Blue Ain’t Your Color” singer when he rings up his prospective partner to see if she’s interested in the gig.

In fact, Keith Urban wore a splash of blue on his black T-shirt during his announcement of snagging the ACM Awards hosting job a second time.

Magically, of course, Mickey Guyton answers, appropriately seated against a blue background, probably to shield the darker skies in her time zone.  The “Black Like Me” ACM-nominee greets Keith with a buoyant “Hi-yee.”

The doting dad of two beautiful daughters inquires “How’s motherhood?”  “It’s the greatest thing I’ve ever done,” Mickey Guyton assures. “Nothing else matters,” the new mom says. She quickly adds, “You’re on the phone with me right now, but nothing else matters.”  Keith Urban wholeheartedly agrees. “This will come nowhere near it, I can vouch that,” he confirms.  Guyton and her husband, Grant Savoy, welcomed their son, Grayson, early last month.

“Would you be up for co-hosting with me?” Keith Urban, at last, comes to the intent of his call.  “Do I have a pulse?” Mickey Guyton playfully questions, checking for sure.  “Yes! Of course! I would love to!” the “Heaven Down Here” singer-songwriter accepts, with no hesitation.

“I’m trying to be very cool and professional,” Mickey Guyton relates before giving an exuberant roar.

Keith Urban lets Guyton know that her sleep will be even more scarce as the co-hosts start rehearsals soon.

“I’m hosting the ACM Awards with Keith freaking Urban,” Mickey Guyton exclaims before running off momentarily in a “praise dance.”  The Arlington, Texas native grew up in church, so expressions of gratitude come very naturally.  God’s timing is perfect.  It took more than a decade for the world to truly see Mickey Guyton, and it took her moment of standing in her own truth to make everyone hear the power and meaning in her songs.  This ACM Award moment comes at the perfect time.

Keith Urban and Mickey Guyton do more than share the stage

If this year’s 2021 ACM Awards offer a Spirit award, then Mickey Guyton and Keith Urban already have that one in the bag before even gracing the stage.  The co-hosts may take trophies home by the end of the evening in Nashville.

Mickey Guyton looks forward to more than one big night.  In a few days, the 37-year-old singer-songwriter may take her first Grammy for her ballad, “Black Like Me.” Guyton wrote the song with Fraser Churchill, Emma Davidson Dillon, and Nathan Chapman.  She is nominated for Best Country Solo Performance.

In a very real sense, Mickey Guyton experienced an artistic rebirth over the past year.  She earned her first nomination as New Female Artist of the Year at the ACM’s five years ago.  Her breakout song, “Better Than You Left Me,” brought the same talent and overcoming pathos that she possesses now, but her life experience and authenticity are breaking through on a whole new level.  Mickey Guyton is indeed a new artist again.

Keith Urban has achieved every ACM Award honor over his career.  He’s taken Top Male Vocalist, Album of the Year, Song of the Year, multiple Vocal Event of the Year nods, and in 2019, Entertainer of the Year. This year, Urban is up for Music Event of the Year as artist and producer for “One Too Many” with another musical pal, Pink. Keith puts his acceptance in the country music community of Nashville prominently on his life-list of high points, just below meeting and marrying Nicole Kidman and having their girls.

Mickey Guyton celebrates being the first Black woman to host the ACMs, and her seasoned partner is clearly pleased.

“If I love that finally, everyone will get to see her infectious energy and uber-creative spirit in full light,” Keith Urban praises.

As for Mickey, she points to Urban as “someone I long-admired,” noting their meaningful collaboration last year. Beyond her excitement and the honor of taking the stage at the ACMs as an example to aspiring young artists of color that “If you see it, you can be it,” something that Mickey Guyton never saw on a stage, she describes The ACM Awards as home.

“The Academy of Country Music has always been a home for me on stage and through their work on diversity and inclusion,” Guyton stresses.  She marks this moment as one of “great significance for me” and she feels thrilled to share it with country music fans.

Mickey Guyton looks ravishing as she radiates joy in black and white this morning.  She knows deep inside that country music is ready for all the rich hues of color and culture to enrich the genre.  She is simply ready to lead the band.

The 56th annual ACM Awards air on April 18 on CBS, with performances from the Bluebird Café, the Ryman Auditorium, and the Grand Old Opry in Nashville.

Blake Shelton Headlines 2 Major Events, See What
Maren Morris’ Tour Bus Is Far From Humble
Kelly Clarkson Listens To Fans & Delivers — Here’s How
Jimmie Allen Puts The APB Out On ‘On My Way’ With Jennifer Lopez
Carrie Underwood Hearkens Back To Signature Style On New Tune