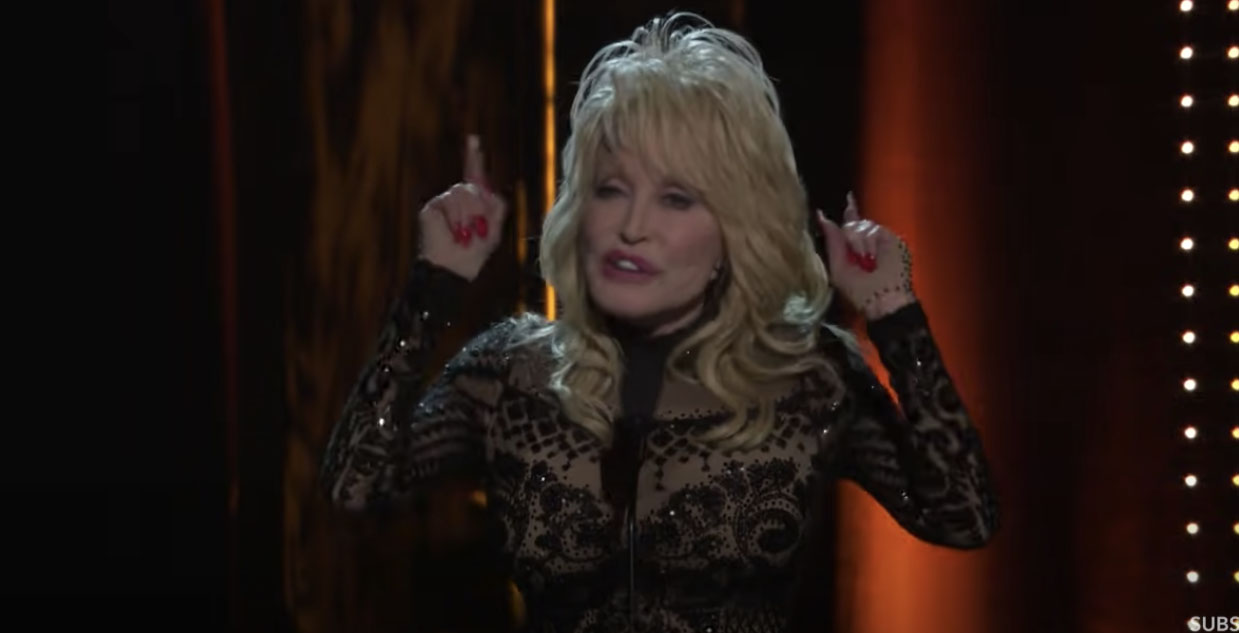 Dolly Parton is not just a living legend in country music and philanthropy.  The entertainment marvel is living proof that every moment in life matters, and she makes every second matter.  At 75, Dolly is doing more than ever to spread the gift of reading and literacy to children everywhere, as her Imagination Library grows in the US and other countries.  The legacy of love dedicated to her father is just one example of how Dolly Parton doesn’t just talk about doing something– she dives into action with all she’s got, determined to “be a light” as she describes her life calling.

Dolly Parton embodies the healing power of music, too.  The songwriter with 3000 to 4000 songs to her credit (but who’s counting!) spread her light in songs of hope and resilience throughout the sheltered situation of the pandemic.  She releases “When Life Is Good Again” from her basement studio only weeks after she makes her million-dollar donation to fund the Moderna vaccine. The artist held hope that others would jump in with additional funding, since, “we got more money than we got time” as only the Tennesseean lady speaks the truth.  She mustered massive amounts of her Dolly Parton sparkle during a Christmas season like no other.

Dolly never hides her light under a bushel, per her grandfather’s counsel.  While Parton always declines the “star” title, the composer of “The Seeker” doesn’t mind the role of the obedient patient when her turn comes to get vaccinated.  Along with her reminder that no one needs to be a “chicken squat,” Dolly Parton started models the closet necessity that is essential now, as noted by MSN via People.  Without even trying, her style is the hottest thing going.

Speaking of doctor’s orders, Dolly Parton missed the Grammy celebration this past weekend (March 14).  Her physician counseled that she needed to be careful about being in groups until she receives her second dose.  Nonetheless, she still has something very sacred and special to celebrate with Zach Williams.  The musical duo earned a Grammy for their divine duet on “There Was Jesus,” as ABC News and Yahoo News confirm.

The usual grace and humility from Dolly Parton

Music is an avenue of ministry for Dolly Parton.  She often reflects on how she has the ability to put feelings into songs that people in the midst of pain cannot express.  Country Music Alley reported earlier this month on the gratitude the icon expressed in being nominated for the honor.

Dolly Parton emphatically insists that “I don’t work for awards or rewards.”  In the case of Zach Williams and “There Was Jesus,” the collaboration itself is a treasure to Parton.

“That particular song– was more rewarding to me than winning an award,” Dolly Parton stresses. She calls the project “a blessing” and Zach Williams surely agrees.   The two posted thanks to one another on social media to accompany the official Grammy congratulations.  The creative partners and believers clearly share a deep mutual admiration society, with no need to be secret.

In her online message, Dolly Parton exuberantly exclaims “Thank you, Jesus, thank you @zachwilliamsmusic, and thank you to the GRAMMYs and all of our fans.  I am very humbled but proud,” the spirit-led singer closes her remarks.

The recognition for Best Contemporary Christian Music Performance/Song marks the 10th Grammy for Dolly Parton.  Zach Williams is no Grammy novice, either.

What about Zach Williams

The journey of faith that connects with listeners on “There Was Jesus” began very authentically for Zach Williams. The 40-year-old rock musician from Jonesboro, Arkansas fronted Zach Williams and the Reformation from 2007 to 2012.  The band toured the South and played Europe from time to time.  They recorded two independent albums, Electric Revival in 2009 and Southern Offering in 2011.

The singer and songwriter with the soul-soaked voice literally went back to church after the Reformation disbanded. Williams takes the role of the worship leader at Central Baptist Church in Jonesboro, continuing his work in music and writing inspirational songs.  In 2016, he signs with Provider’s Essential and releases the affirming, moving ballad, “Chain Breaker,” which expands to a full EP.

In 2018, Zach Williams and Chain Breaker take the honors as Best Contemporary Christian Album at the Grammys.  Dolly Parton enters the creative process with Zach Williams in 2019. Together, the artists in faith craft their own story of “the healing and the hurting” and the “blessing from the broken pieces” in “There Was Jesus.”  The rest is now Grammy history, and the friendship is forged forever in a family of faith.

The perfect top for a shot, ala Dolly Parton

Dolly Parton’s good friend and physician, Dr. Naji Abumrad, provided the perfect gentle touch in giving the patient her vaccine.  Parton knew what she was in for, and dressed to a tee in her luscious loyal blue dress with cutouts all along the arms.

Dolly never fails to be on-point with appropriate attire.  She didn’t have to roll up anything when the time came for her shot.  Merchandisers are jumping on the Dolly Parton-inspired bandwagon with all manner of strand and peekaboo arm openings on “cold shoulder” tops.  The must-haves seem tailor-made for summer.  One reviewer called her “miniclouse”  “soft, comfortable, and attractive.”

Dolly Parton promises that she never spends big bucks on her everyday clothes.  Instead, she reserves the big expenditures for her sparkle-studded “show clothes.”  This Dolly-Esque, not-quite sleeveless design stays around past the pandemic, though. Shouldn’t there be Dolly Parton designs in honor of the inspiration? The Country legend certainly knows numbers, and Amazon doesn’t need the sales, really, do they?  What do you think of Dolly Parton’s shot-day style?  Shout out in the comments!