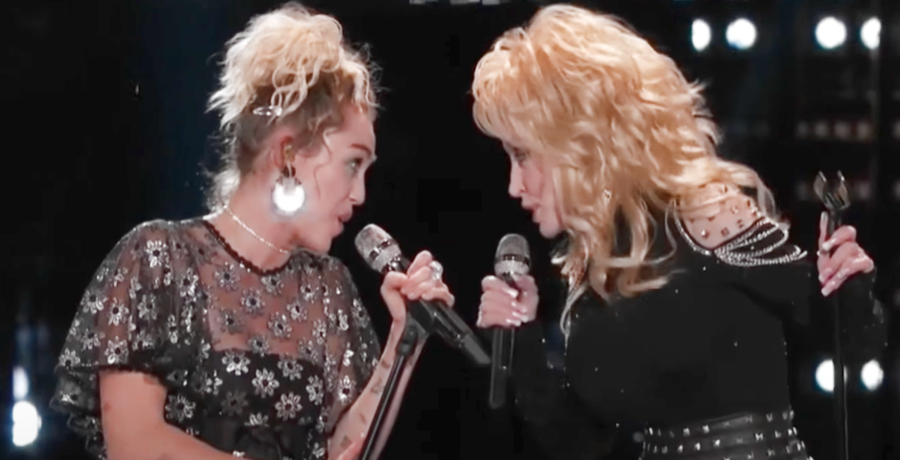 Countless fans the world over cherish Dolly Parton for much more than her timeless songs of love, faith, overcoming, and just plain fun.  As many the country music legend’s loving followers surround her with love and prayers through the painful recent loss of for uncle, Bill Owens, Dolly Parton relates a back story she seldom delves into in a Yahoo! entertainment feature.

Dolly Parton and Miley Cyrus continuously celebrate their bond of love and their personal and powerful mutual admiration society.  The roots of their relationship run deeper than blood for the singers with Country in their souls.  Both of them playfully put “fairy” in front of their godmother-goddaughter title and attest that their enduring family ties stay grounded in unique friendship.

It was Dolly Parton’s idea to become Miley’s godmother

Sometimes, Dolly Parton fans show their affection in peculiar ways.  Fox News and numerous other sources are reporting the phenomenon of her Jeni’s Splendid Ice Cream flavor, Strawberry Pretzel Pie, going for $1000 a pint on eBay.  The creative collaboration began to benefit Dolly Parton’s Imagination Library initiative to foster young readers.  However, secondary sellers and third, fourth, (and who knows, however many) party sellers down the chain don’t have such lofty intentions.  They just want the bucks.  A better idea is to send Dolly’s favorite cause a check now, and wait patiently while the sweet treat in honor of “The Seeker” artist comes back to ample supply.

Dolly Parton likely finds spending $1000 on a single pint of ice cream, even one with her namesake, ridiculous.  She recalls the struggles of her family frequently, such as surviving frigid Tennessee mountain winters.  Notably, she also realizes how long her family could stretch $1000 to last.  Those “country memories” from “country kids,” like she calls herself and Billy Ray Cyrus in the early days, forged a legacy of family.

“I worked with Billy Ray for all those years,” Dolly Parton recalls of the heyday of “Achy Breaky Heart.” Cyrus opened for Parton on numerous shows   “We just got to know each other,” Dolly confirms of their kindred connection. “We just kind of gelled, ‘cause we’re both country kids,” the “My Tennessee Mountain Home” singer reminisces in a story from The Pioneer Woman.

“We had a lot of fun just talking about that,” Dolly Parton remembers of the stars’ shared roots.  “So when Miley came along, I said ‘She’s got to be my fairy goddaughter.’”  Once someone like Dolly Parton proclaims a wish like that, no one can argue.  The blessing of the bond is obvious across generations.

Dolly Parton and Miley Cyrus are more than connected by the heart and the soul.  Incredibly, they share many of the same fans.  Dolly Parton recently commended Hannah Montana’s 15th anniversary, as Country Music Alley reports.

Miley playfully replies that her “Aunt Dolly” taught her “the important things in life.  Like how to glue down a wig, use a bedazzler, and treat everyone you meet with kindness.”

The last quality mentioned embeds most deeply in Miley Cyrus’ heart.  She calls her “fairy godmother” a “living angel on earth” because of the time, Dolly Parton takes to listen and treat every person She encounters with genuine kindness, from the janitor to a grocery clerk or a record company executive.  People matter to Dolly Parton. Miley Cyrus is also in awe of the number of hats that her godmother always has on hand to give away.  Hats or no hats, Dolly believes in showing more than merely speaking.

“I’ve told her some things that I think are valuable and that she uses,” Dolly Parton says of her goddaughter.  Nonetheless, “I’d rather lead by example,” the unmatched songwriter pledges.

“Everybody’s different.  You’ve got your own journey,” the most beloved godmother ever realizes of Miley Cyrus.  Dolly Parton asserts that “some people are going to help you along the way and they can kick a few rocks out of the road for you, but you got to walk it.”

Miley Cyrus has the most loving rock kicker ever in Dolly Parton.  Her dad, Billy Ray, was in Parton’s video for “Romeo” back in the day.  Instead of playing the hard-living heartthrob, he and Tish remain stalwart supporters of their seven children.  Miley applauds them both for their strength and hard work.

Miley Cyrus wrote a very honest, mature letter to her TV persona, Hannah Montana, as E News notes.  For all success brought from being part of Disney’s franchise brought on the “rocket that flew me to the moon and never brought me back down, “ as Miley writes, it brought struggle and confusion for the talented girl going through every milestone in front of millions.  She yearned to be herself– not a commodity.

Miley Cyrus spread a big scoop of gratitude to her fans that godmother Dolly Parton would be proud of.  Ultimately, she thanked Hannah Montana as “a friend,” declaring “We’ve been through it all.”  The “Angels Like You” singer celebrates in her own right as her rocking Plastic Hearts album passed 1 billion streams on Spotify.

Cyrus oozes with “Love and appreciation to everyone who has been listening #PlasticHearts & supporting my life’s purpose from the beginning.” Miley Cyrus credits that “Music is an essential part of my existence,” while showing off her smiley grill on social media.  Genetics or not, talent runs through the veins of Dolly Parton and Miley Cyrus.

“I can’t thank you enough for making my dreams a reality,” Miley Cyrus closes her grateful comments.  Dolly Parton certainly expresses the same words to her millions of faithful legions, and some of them get a hat!

What do you admire most in Dolly Parton?  Speak out in the comments!