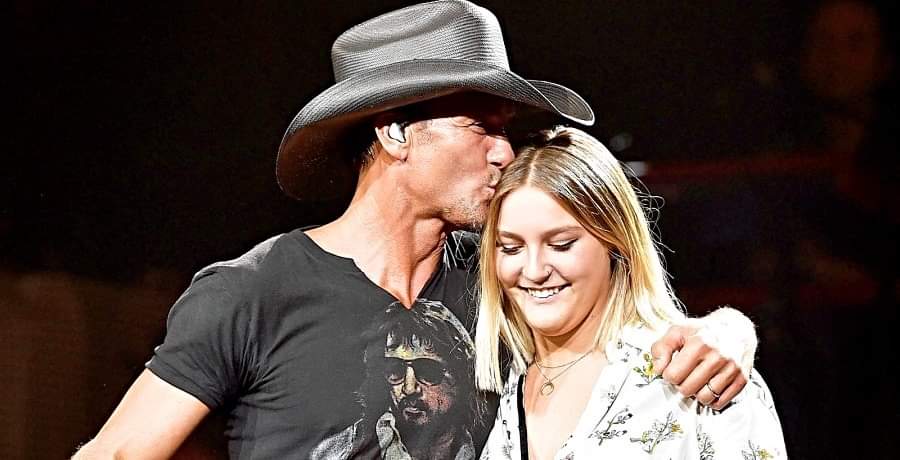 As the eldest daughter of Tim McGraw and Faith Hill, Gracie McGraw grew up saturated in the sound of two of the most beloved and celebrated voices in all of country music.  She also knew, like her sisters, Maggie and Audrey, that she was cherished, not as a “celebrity child” or as a protégé of her famous parents’ dreams and careers, but for her own personality and gifts given by God.

Long before Gracie McGraw or her sisters became the living bundles of energy and joy that filled the lives of Tim McGraw and marvel mom Faith Hill for decades, the parents had a long talk about their priorities in raising the girls. In a February Country Music Alley feature earlier this year, Tim relates the strategy that he and Faith adopted to be together as a family “most of the time.”

Their example taught lessons of how to be present in a career sense and still be present and “hands-on” with their daughters.  They aimed to instill “a great work ethic and being human at the same time.”  By all accounts, Tim McGraw and Faith Hill succeeded on that score.  Gracie McGraw is following her passion for performance and song.

Just because Gracie McGraw seems destined and she is determined to follow her Broadway dreams, it never means she can’t have fun, as captured in a Hollywood Life feature. Under a bright, beautiful sun in her backyard, Gracie fills with glee as she swirls and sways to “the Divine Miss M,” as she captions on social media. An affectionate, furry friend wants to slow dance, too!

Gracie McGraw throws it down in black and red

The ever-sunny singer/dancer declares that she’s “Basking in the sunlight,” and basking in “the glory” of Bette Midler.  The McGraw sister flawlessly syncs with “Do You Want to Dance?” Like Bette Midler, Gracie McGraw doesn’t know the meaning of “halfhearted” in anything she does.  Whether she’s daring herself to do moves on a pole to build her confidence or courageously sharing her stories of body acceptance and building self-esteem to inspire her many followers, the oldest of Tim McGraw and Faith Hill’s daughters dives in with her whole heart and Broadway-bound talent.

Gracie kicks up her heels, jumps, and pours out the spirit and shine in this literally sultry rendition.  Her red hair announces that Gracie McGraw has got this one.  Just as she goes out of frame, the following video continues the fun with her faithful dog in just the right hold on McGraw’s shoulders.  Her look resembles retro flair in her black jumpsuit and Vans footwear.  The singer finishes the routine on her own, but followers soon applaud her efforts.

“Gosh, to have this much energy and personality! @annielpeters commends McGraw.  “Love your happy feet!”  There’s no doubt that Tim McGraw and Faith Hill feel the same.  Certain things clearly run in the family, like talent and dog love.

The pandemic put the kibosh on performances altogether on Broadway, until some only recently resumed in a socially distanced protocol.  At 23, Gracie McGraw remains undaunted by the situation. She stays in fine vocal form, too. Only months ago, a friend documented this divine performance from the McGraw sibling of “I Know the Truth” from Aida.  “I heard it’s coming back—I hope it’s coming back!” Gracie gushes before she sings a cappella.  Tim McGraw and Faith Hill know what it is to raise a trio of troopers who never give up.  Their youngest, Audrey, 19, recently moved to New York City to pursue her path in life.

As for the enhancement of cuteness, Gracie McGraw isn’t the first McGraw girl to partner with the dog.  Maggie, 22, cheered up her mom, dad, and anyone who saw her precious duet performance with the family dog, Stromboli.  The Metropolitan Opera probably gave the middle daughter a call.  Singing is part of the genetic code for following generations after Tim McGraw and Faith Hill.  Only time will tell if the same is true for the future family pups.

Tim McGraw doesn’t even try to compete with Stromboli.  In fact, the multi-ACM and CMA Award winner calls himself “the worst singer in the house.”  His view is understandable, with Faith Hill and three gorgeous daughters with individually-gifted voices, among other talents, in his immediate sphere.

The “You Had to Be There” artist is there for each of the lovely ladies in his life, and he loves dogs, too.  He includes “Doggone” as the heart-tugging closer to Here On Earth. Every listener needs tissues before the last verse!

Gracie McGraw sang with her dad, Barbra Streisand, and Barry Gibb on “Guilty” during a father-daughter drive.  During the pandemic, road trips became a kind of safe, spiritual salvation for the family.  Being out in the fresh air and open windows is less restrictive as safety protocols ease, so dad Tim McGraw and mama Faith can bet that whatever vehicle he drives will fill with the sound of sweet family voices come summer.  Get the playlist ready!