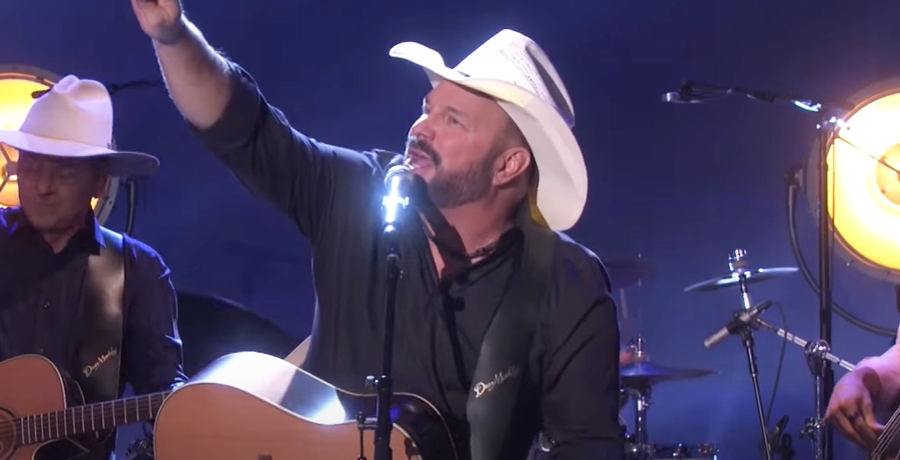 Some country music fans call it saving the best for last, while Garth Brooks loyalists over the decades declare that divine providence took over in crowning the night with the celebration of the biggest solo artist in music history at the 43rd Kennedy Center Honors on Sunday night, June 6. Whatever the case, no one creates a country party or a call for human unity like the superstar.

He didn’t crash the stage or launch into a moving duet with his beloved “Miss Yearwood,” his bride of almost 16 years, but Garth Brooks held nothing back, even from the pair’s front-row perch in the audience.  From dancing to letting the dam break on the waterworks, this artist is never afraid to feel every feeling, no matter what comes, as The Hollywood Reporter and The Tennessean via MSN verify.  Through all of the artistry, tears, and laughter, everyone left with a smile.

Kelly Clarkson leaves no doubt of her admiration for Garth Brooks

This Year’s Kennedy Center Honors deserves commendation for their many efforts to salute the immense talent of the 2021 class.  For instance, actress, director, and choreographer extraordinaire, Debbie Allen, receives the distinct honor of watching her daughter, Vivian Nixon, as the lead dancer in an outdoor tribute to her mother’s “Sweet Charity” performance on Broadway.  Later, some students from Allen’s dance academy joined with those of the honoree, Midori, in a beautiful water dance enhanced by the youthful violinists.  A rousing rendition of “Step in Time” paid tender salute to Dick Van Dyke from the outdoor pavilions.  Garth Brooks brings the same vivacious energy to his shows, but a little less precision and polish.

Country music and Americana legends, Mary Chapin Carpenter and Emmylou Harris offered “We Shall Overcome” and “Diamonds and Rust” to Joan Baez, cuddled with her grown son.  Rhiannon Giddens joined Dirk Powell for an absorbing, spirited duet of her minstrel banjo with a fiddle that had Joan Baez dancing from her seat.  Garth Brooks and Trisha Yearwood both clapped and toe-tapped in appreciation.

Coincidentally, Kelly Clarkson is already a Country Music Alley favorite for her daring to take on rock to old-time country music classics (with everything else in between) on the Kellyoke segment of her daily talk show.  When it comes to Garth Brooks’ most timeless ballad, however, Kelly needs no surging choir or huge orchestra filling the stage.

She opens “The Dance” with the singular, exquisite power and emotion of her one voice.  In an instant, tears flood from both eyes for Garth Brooks.  Trisha Yearwood provides a steady, calming back rub. Finally, love and gratitude overcome the awe for the honoree.  He takes off his hat and gives a hand over his heart in genuine thanks.  One voice and a piano convey powerful emotion in translating a lifetime of friendship and music.

If Garth Brooks got only one pick of a performer for his honor Sunday night,  the odds are certainly in favor of James Taylor.  After all, Brooks named his oldest daughter after the “Sweet Baby James” singer-songwriter.  The native Oklahoman pays tribute to the New England a dead-on impression, too. Still, there’s no limitation for an artist like James Taylor,  Garth Brooks seems truly swept in wonder when Taylor comes out to sing “The River” in front of its composer.

Remarkably, Brooks throws his head back and appears to shiver with joy. Numerous times through the chronicle of finding a life mission, both Garth Brooks and James Taylor give mutual nods, smiles, and signals of affection.  It became impossible not to lose count before the end of the song.  By the end of the song, however, Garth was standing in salute and savoring every sweet second.  James Taylor reciprocated with a bow and his removed hat before leaving the stage.  Taylor praises that Garth Brooks’ music carries “emotional freight.” The compliment says much about the camaraderie forged over friendship and music with a message.

Musicians aren’t the only ones with loving words

Actor Bradley Cooper calls Garth Brooks “a power hitter who swung for the fences” in his introduction.  He comments on how Brooks fuses “country music, rock, gospel, and honky-tonk,” still remaining uniquely himself.

On a much more personal level, John Travolta speaks of Garth Brooks as someone there for him with “a strong shoulder, an empathetic ear, and a vessel of wisdom to help me get through.”  No doubt, Travolta relives the pain of the loss of his wife and son in separate, but no less traumatic, instances.

Returning to the music, a buoyant Jimmie Allen comes to the stage.  Between being newly married and his tour with Brad Paisley, the “Best Shot” artist has a lot on his plate, but never too much to keep him from honoring a great in country music.  Allen dives into the deep but immensely powerful saga of “The Thunder Rolls.”  He sounds impeccably more and more like Brooks with every lyric.  For once, Garth Brooks has no tears– only appreciation in his eyes.  The performance is masterful.  Now, however, a little libation and letting loose is in order.

It’s not often that anyone sees faces familiar on the Washington, DC Beltway smiling and singing in unison.  Believe it or not, that phenomenon happened the second that Jimmie Allen sang the opening verse of “Friends in Low Places.”  When Jimmie requests audience assistance to help him finish the song, Garth Brooks rises immediately, nearly yelling with jubilance.  The honoree and the performer doing the honors lead a sing-along worthy of Garth’s cowboy boots.

Speaking of boots, Garth Brooks scoots his boots with more than a few others in attendance, as the camera captures.  “Thanks, man for all you’ve done,” Jimmie Allen speaks before departing.  Only a queen of music and faith (other than Trisha) can properly give benediction to evening,

Glowing in white, the marvelous Gladys Knight, begins “We Shall Be Free” in her exquisite and soulful reverence.  “I love her,” Garth appears to whisper to Trisha.  The “Midnight Train to Georgia” marvel sings this heartfelt song to the honoree himself.  A hush of unity fills every heart, and Garth Brooks walks closer to the stage to blow sweet kisses. The blessings of being exactly who he is—“ nobody special” in his words, feel special to everyone blessed to be there, in person or by the small screen.

Do you have a favorite moment from the Kennedy Center Honors?  Give a shout in the comments!

Be sure to keep up with Country Music Alley for the latest news on your favorite country music stars!