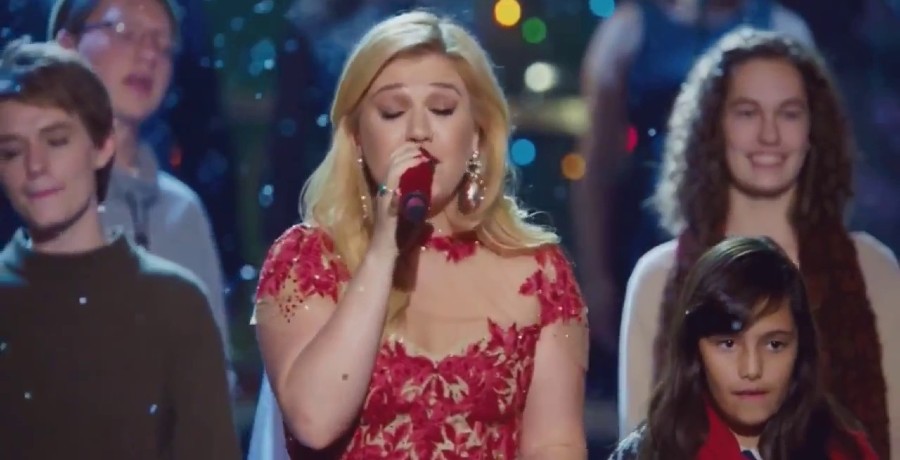 Kelly Clarkson is celebrating Christmas a little early this year. The talk show host took to social media to promote her new project titled When Christmas Comes Around. As Country Music Alley previously reported, the country singer is coming out with her second Christmas album. It’s the follow-up to her 2013 album, Wrapped in Red.

Fans were looking forward to a breakup album. Also, some of them feel that she can’t top her first-ever Christmas album. They agree that it has the perfect mix of classic and modern holiday music that’s still timeless to this day. But it looks like she will be taking jabs at her estranged husband, Brandon Blackstock.

On Wednesday, September 22, Kelly Clarkson shared a new post on Instagram. She shared a clip of a golden curtain revealing the singer dressed up in a navy blue gown. The songstress was decked out in old Hollywood glamour. Kelly announced her new Christmas album.

But there’s one little problem. There isn’t any sound in this clip. Yet, Kelly promised that there will be plenty of music to listen to on this new album.

“You’ll have lots to listen to #WhenChristmasComesAround this year… 🎁🎶😉 #ChristmasIsntCanceled,” Kelly teased in her post.

Fans wanted to hear some new music. One user begged, “WHERE IS THE SOUND KELLY.” Some of them agreed with that fan and felt like Kelly Clarkson was trolling them. Others thought something was wrong with their phones.

Kelly Clarkson did share one song from the album. Previously, she teased the lead single which is aptly called, “Christmas Isn’t Cancelled (Just You).” On Wednesday, she dropped the single on her official YouTube platform.

However, not everyone is in the Christmas spirit so early in the year. The video only amassed over 4,000 views within 23 hours. Unfortunately, comments are closed, so it’s hard to tell what fans think of the new song. But she did release the lyric video for the song, which has over 39,000 views and fans buzzing:

Get the complete tracklist

Kelly Clarkson returned to Instagram to drop the full tracklist. She shared a clip that unveiled each song that will be on the album. The “Because of You” singer also confirmed her duet with Ariana Grande. Fans are looking forward to hearing more music from the powerhouse vocalists. The tracklist includes the following:

Like the previous post, fans can’t hear any music in this one either. Most of them are excited about Kelly’s duet with Ariana. Others called her a “Christmas queen,” while some noticed she’s already getting into the holiday spirit.

What are your thoughts on Kelly’s new Christmas song? Are you excited about her new album? Sound off below in the comments.

Miranda Lambert Voted One Of Most Influential People 2022
Maren Morris’ Tour Bus Is Far From Humble
Jimmie Allen Puts The APB Out On ‘On My Way’ With Jennifer Lopez
Kelly Clarkson Listens To Fans & Delivers — Here’s How
Keith Urban Relies On Marital Devotion For Sobriety?