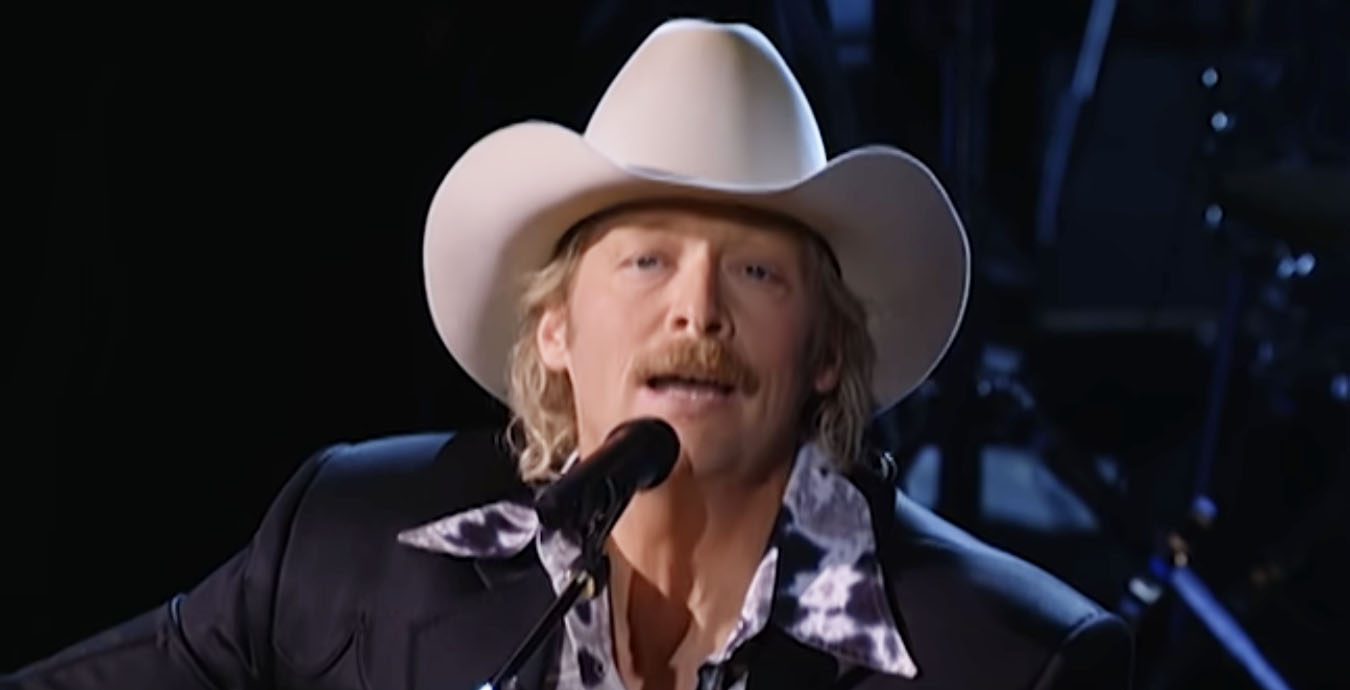 No matter the age or era, no country music fan claims a proper education in the genre without a full repertoire of Alan Jackson songs etched into his or her consciousness.  Whether it’s the youthful, summertime abandon of “Chattahoochee” or the pure honky-tonk satisfaction in “Chasing That Neon Rainbow,” every listener feels that Alan Jackson stands for Country to his core.  Love that lasts matters to Jackson, too.  The ageless “I’ll Go on Loving You” and “Remember When” carry anyone’s hopes for the later and twilight years of life– to hold the hand of the one you love beside you.

Speaking of love, and outpouring of affection floats all around Alan Jackson in this moment.  As Yahoo via People and a candid Today interview convey, the artist famous for singing his roster of memorable hits rather than discussing any personal topics is talking about his diagnosis of a hereditary degenerative disease.  Naturally, no one finds a shred of any “boo-hoo’s” beneath the cowboy hat of the man who made his career on the belief of being “country strong” in his artistry and his outlook.  Instead, Alan Jackson takes a look at his future in gratitude, looking forward to still being on stage and treasuring family even more.

Alan Jackson made it to the top of the mountain, now maybe no more hills to climb

During his visit with Jenna Bush Hager, Alan Jackson marvels as he reflects how a rural Georgia boy sits surrounded by the revered pews of the “Mother Church” of country music at the Ryman Auditorium.  “It’s like the top of the mountain, when they put me here,” the “Gone” singer declares.  “I can’t believe I’m part of all of this.”

Remarkably, there was no live music where Alan Jackson grew up.  The chart-topping singer sustained himself on “church music” sang with his family.  While Jackson somewhat shrinks from the spotlight, what he loves most about performing is hearing a crowd sing songs back to him and flash signs of the most special songs. “It’s endearing,” he assures.  He also enjoys how the genre of country music encapsulates every kind of mood, from rebel-rousing to humor and heartbreak.

Fortunately, Alan Jackson displays no signs of heartbreak when he corrects Jenna on describing his diagnosis of Charcot-Marie-Tooth disease as recent.  On the contrary, Jackson redirects that he and his family received the news of the condition some time ago.  The megastar has been “reluctant” to reveal the news, not wanting to be seen as “a celebrity with some problem.”  Unquestionably, Alan Jackson – is that “I’ve had a wonderful life and a great career” at 62.  This is no sob story.  He wants his loyal fans to hear the truth from him.

Don’t blame it on the alcohol

In his classic, “Everything I Love Is Killing Me,” Alan Jackson professes his affection for “cigarettes, Jack Daniels and caffeine,” along with his woman.  However, in the case of his condition, the artist pledges that nothing poured from a bottle affects his stance on stage.

“I don’t want them to think I’m drunk on stage because I have these problems with mobility and balance,” Alan Jackson explains.  Furthermore, he elaborates that the effects of CMT are becoming “more and more obvious,” so he wants to divulge the truth rather than feed any speculation.

Following Alan Jackson’s diagnosis, the family understood that his father, Gene, had the condition that affects 2.6 million people worldwide.  Alan concedes that his dad could only “get around a little bit” by the time he died in his 70s. His paternal grandmother and older sister also had the disease.  CMT is related to muscular dystrophy and Parkinson’s disease, affecting the muscles, mobility, and balance.

“it’s not going to kill me– it’s not fatal,” Alan Jackson understands.  He also realizes the possibility of early disability.  At one point, a comment ends with “if I perform anymore.” A little later in the conversation, though, Jackson relishes his heroes like “Merle, Loretta Lynn, and Willie Nelson, still playing at nearly 90 years old.”  In the moment, aspiration takes hold, and Alan Jackson says “I’d like to perform as much as I can,” hinting that every now and then would be a joy.  Whatever the case, he won’t be part of any “cheesy” farewell tours, on and off every other year.

Country Music Alley captured Alan Jackson in fine form for the ACM Honors and A Capitol Fourth earlier this year. His acclaimed album, Where Have You Gone, not only made a bold statement for genuine country music, but also contained a wedding song to pass on to all three of his grown daughters.  “Writing it once was hard enough,” dad exclaims.  Now, only one remaining Jackson daughter is left to share her father’s musical legacy.  Not to forget, “Drive (For Daddy Gene)” reigns eternally as the ultimate dad song in Country.

As for his own bride, Alan Jackson says that after “40-something years,” he and his wife, Denise, are ultimate cheerleaders for each other.  “When I have a bad day, he lifts me up.”  In turn, the encouraging spouse lifts her husband up to the days when things take a tough turn. There’s no stopping these two.

The gifts of love and song endure

Alan Jackson recalls a time when watching the charts and praying for single to hit high were huge concerns.  These days, the singer-songwriter, husband, and father is forever grateful for family and love us to lean on.  The songs always remain, too, just like the gift of songwriting,  If Alan Jackson does his next show or 10 shows from an easy chair, fans don’t mind one bit.

Country Music Alley sends out love and strength to Alan Jackson and his family.