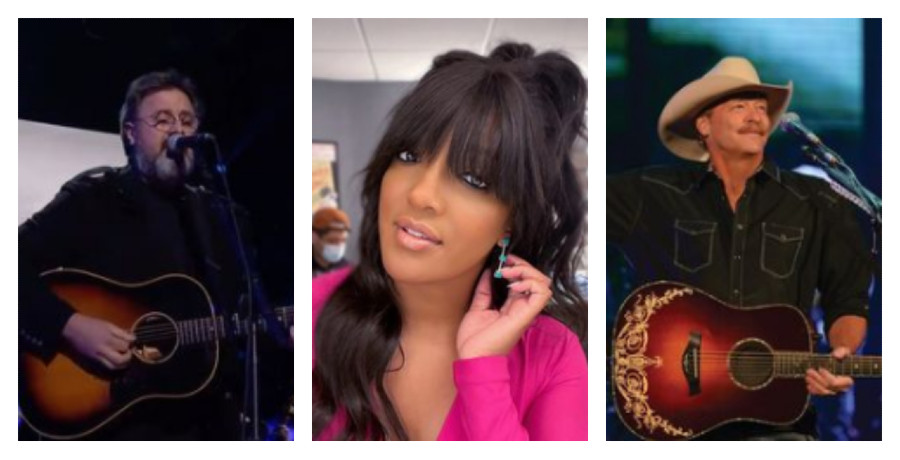 Country music is certainly good for the soul. Alan Jackson, Mickey Guyton, and Vince Gill know for sure that soaking in country music will feel just fine for America, too.   The singing, songwriting trio of stars share this stage in honor of men and women in uniform, the families who support their mission, the fallen, and the nation on May 30 for the National Memorial Day Concert on PBS, as Taste of Country CMT Edge verify.

Different than many of the major networks, PBS steeps its broadcast celebrations of the nation in patriotism and the meaning of the occasion in music.  Country performers are always in the forefront, but this year, public television’s National Memorial Day Concert: A Night of Remembrance is bound to resemble a full-on country music takeover.  Mickey Guyton opens the night with reverence, while Alan Jackson, Vince Gill, and a bevy of familiar artists fill the 90-minutes with songs and salutes to those in service.

The honor of the national anthem comes to Mickey Guyton

On Memorial Day, no other song outshines the national anthem.  The Grammy-nominee for the powerfully honest “Black Like Me” grew up splitting time between Arlington and Waco, Texas.  Mickey Guyton sang “The Star-Spangled Banner” countless times in endless places through her decade-long climb to be truly heard, seen, and understood as an artist.  She took on the song at the Country Radio Seminar back in 2015, fresh off her breakout original song, “Better Than You Left Me.”

Faith, talent, determination, and hard work do work miracles.  Despite a pandemic, the past year opened hearts and ears to Mickey Guyton’s truth and a tremendous voice like never before.  The “Heaven Down Here” singer made history as a performer and as a co-host of the ACM Awards in the space of a year.

There’s absolutely no doubt that the singer’s heart will be open wide for her audience of decorated Armed Forces members.  Mickey Guyton thinks of those in masks and PPE as well as those wearing medals.  Her sister is a frontline nurse.  There are hopeful reasons to envision a truly live celebration, perhaps by the Fourth of July.

Sadly, this Memorial Day offering from PBS is still under strict public health protocol for production. Pre-taped performances feature in the May 30 airing.  No one on the stage hears exuberant applause or cheers.

As it happens, however, Vince Gill, Mickey Guyton, and Alan Jackson did share the same stage, in a sense, already this year.  The 37-year-old mom, Guyton, truly glistened in her gospel-style vocals and in her golden gown at the Grammys.  She didn’t take the golden gramophone, though, and it’s all good.  Vince Gill garnered this year’s hardware for Best Country Solo Performance with “When My Amy Prays.” Amy Grant, a.k.a. “My Amy,” is a huge Mickey Guyton cheerleader and friend.  Her encouraging words on social media to the first-time mommy remind her that her baby boy, Grayson, is her greatest accomplishment, even in this remarkable year. These two ladies know how to count blessings.

Alan Jackson wins for the most emotional performance of the night at the 2021 ACM Awards weeks ago.  The beloved veteran singer-songwriter known for some of the biggest hits in country music history had tears in his eyes at the close of his medley of “Drive (For Daddy Gene)” and “You’ll Always Be My Baby.” Everyone in earshot likely wept the same remembering tears, too.   Vince Gill and Mickey Guyton never sang a chorus with Alan, but from a safe distance, they applauded.

In the PBS tradition, the support team of performers alongside Alan Jackson, Vince Gill, and Mickey Guyton is no B-List bunch.   The familiar hosts, Joe Montegne and lifelong veteran supporter, Gary Sinise, return for duty.  R&B legend, Gladys Knight and the Four Tops make a patriotic comeback, and Broadway’s Sara Bareilles, Denyce Graves, and actors Mary McCormack and Steve Buscemi contribute in the salute to those in service.  The Memorial Day event is a standard for the past 30 years on PBS

Fortunately, no faithful fan needs to wait 30 years to hear new music from any of the versatile headliners in the show.  Vince Gill pairs up with old pal, Ronnie Milsap, on the fun romp, “Big Bertha.” Alan Jackson rewards fans richly for their patience with his first studio album in six years on May 14.  Where Have You Gone serves as proof positive that Alan Jackson fans aren’t going anywhere?  Mickey Guyton is about to be very busy between changing diapers.  At long last, her first album is due for release this summer.  If the Memorial Day special leaves viewers inspired, they surely will do some album-shopping.

Stay tuned into Country Music Alley for news on the latest new music by your favorite Country artists!