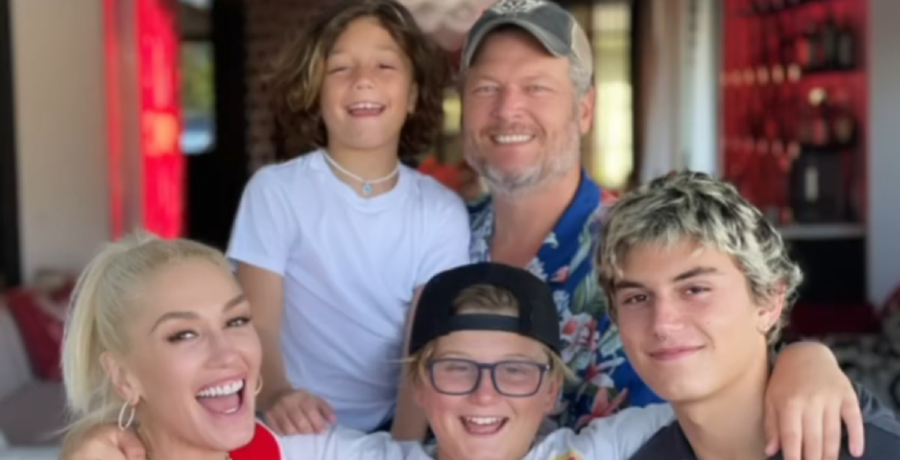 Blake Shelton made a rare statement about being a stepfather to Gwen Stefani’s sons. She shares three sons with her ex-husband Gavin Rossdale — Kingston, 15, Zuma, 13, and Apollo, seven. Blake has stepped up and become like a father to them. He continues to make memories with them.

He even helped them create a bacon-wrapped turkey for Thanksgiving. Gwen’s sons love to come up with unusual turkey dinners. Gwen and Blake celebrated their first holiday season as a married couple. They wed on July 3, 2021, in Oklahoma. Now, he’s speaking out about their new home and being a stepfather.

Gwen and Blake have a lot to celebrate these days. They purchased a new home in Oklahoma. Little is known about it. Gwen has given fans a glimpse at it on Instagram. Before the holiday season, the No Doubt singer shared they were heading back to Oklahoma. It was the first time they returned there since their summer wedding.

“We have a new house there, we have a new life there,” Gwen Stefani previously said. “So it’s going to be our first married Thanksgiving, very grateful, very excited.”

Around that time, Blake announced on social media that he’s releasing a new song titled “We Can Reach The Stars.” He wrote the song for his wife for their wedding day. He also shared a never-before-seen photo from the ceremony. The photo featured the Oklahoma landscape in the background.

Blake admitted that they were going to write their own vows. But, he got the idea to write a song instead. He wanted to show her how much he loved and appreciated her. The Voice host Carson Daly officiated their wedding. They were surrounded by around 40 of their closest friends and family members.

The “Come Back as a Country Boy” singer sat down for an exclusive interview with Sounds Like Nashville. He made a rare statement about Gwen’s sons. The couple is typically private when it comes to their family life and how they try to navigate it. Blake talked about their holiday season. He said that Gwen’s boys saw a picture of a turkey wrapped in bacon and said that it was “happening.”

“There’s no talking them out of it, based on the picture that they saw, which was the greatest picture you’ve ever sever seen,” Blake Shelton told the publication.

This past holiday season was their best one yet. The blended family took on their five-year family tradition, which they succeeded. Blake and Gwen proved why they make such a good couple. And it’s obvious as to why her sons love him so much.

Blake Shelton Headlines 2 Major Events, See What
Maren Morris’ Tour Bus Is Far From Humble
Jimmie Allen Puts The APB Out On ‘On My Way’ With Jennifer Lopez
Kelly Clarkson Listens To Fans & Delivers — Here’s How
Miranda Lambert Voted One Of Most Influential People 2022