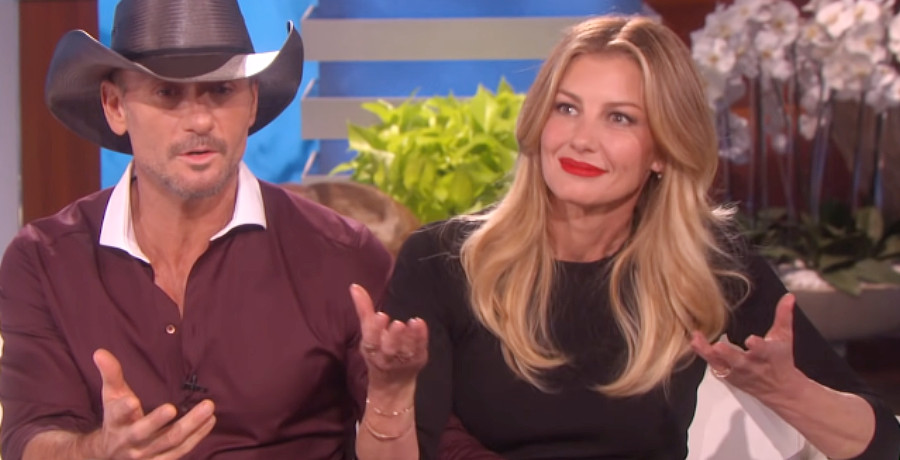 It’s not every day that Country megastar Tim McGraw turns 55. Naturally, his bride of 25 years, Faith Hill, had every intention of celebrating the day. A few hundred miles and being on the road doesn’t stop the “Breathe” songstress from pouring her heart into “Happy Birthday” and presenting birthday cake. Much to her hubby’s delight, an invitation for steamy pleasures comes later.

Faith Hill is the best birthday decoration of all

Like every notable country music artist, Tim McGraw joins his band for a preshow warm-up, as the snippet from ET Canada captures. While Tim certainly relishes singing songs like “Sheryl Crow” and “Hallelujahville” from the 2020 album Here On Earth, another song from the album, ”Good Taste In Women” likely ran through his mind as he sees his wife. Just as he gets to the warmest part of the verses to Kenny Rogers’ “You Decorated My Life” and the words “by painting your love all over my heart,” Faith Hill enters from a side door with several of her husband’s entourage.

Of course, no one equals the soulful, gospel-esque heights in a song that Faith Hill famously reaches. However, Tim McGraw radiates enough superstar power to draw some stellar tour mates, as People per MSN confirms.

Russell Dickerson led a rousing crowd of concertgoers in their own joyful salute to the hitmaker on his double-five day.  Not surprisingly, country music up-and-comer, Alexandra Kay, showered Tim McGraw with gratitude for the “honor and a pleasure [of] opening for you,” before blowing the headliner a kiss. Brandon Davis kept the compliments and the good vibes going for Tim, echoing how he hoped the milestone day was “the greatest.”

Faith proposes the best of all gifts to Tim McGraw

Indeed, Tim McGraw got deluged in praise for his 55th, with a big show of support from all involved.  The best offer of the day, though, certainly came from his wife, as Hollywood Life details. Country Music Alley probed Faith Hill’s knack for knowing the perfect gifts on their 25th anniversary and on Tim’s birthday last year, when she presented him with Edward Rutherford’s landmark work, China: The Novel.

Instead, this year, Hill takes to her Instagram, suggesting, or more than suggesting, a saucy, sudsy, and totally sultry re-do of the couple’s mesmerizing bathtub scene from patriarchal prequel to Yellowstone, 1883. Creating their magical moment on the set was less than something to savor for the real-life partners, coping with several takes in less than warm water and a crew surrounding their re-creation of intimacy.

In contrast, Faith Hill makes it more than clear that this particular invitation is only for one.   The spouse opens with a paraphrase of the Beatles’ “Birthday” line. “Oh, you say it’s your birthday, Tim McGraw?,” followed by pink hearts.

“Um…What about a date night?” she proposes. Knowing the answer, Tim McGraw’s “Shotgun Rider” aptly responds, ”K See you later,” topped off by a multitude of smoochy faces and “Love you, too,” with flames joining the kissing gang.

Never believe anyone who says 55 is over the hill.  For one, or rather, two, Faith Hill and Tim McGraw are living proof that the fires of passion are heating up more than ever.

Keep up with the artists heating up country music by keeping Country Music Alley as your go-to source for the latest news!  Leave your comments, too!