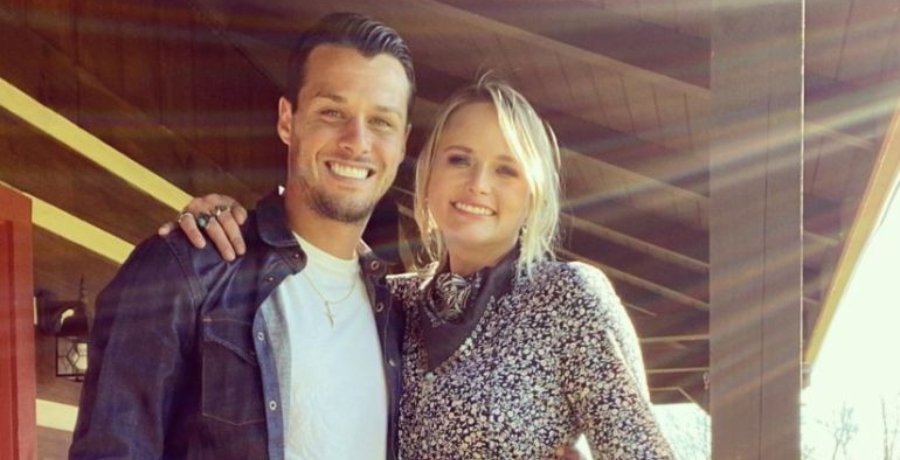 Miranda Lambert and Brendan McLoughlin shimmied with drinks. Fans are going crazy over their latest video. Miranda is aware of what they think about her marriage with the former NYPD officer. The 38-year-old country singer and her 31-year-old husband showed off their dance moves in their latest social media video. Read on to learn more and see the clip for yourself.

Earlier this week, Miranda Lambert took to social media to share a clip of herself dancing with Brendan. The two boogied along to her new song “Actin’ Up” form her new album, Palomino. The blonde country songstress wore an emerald green and black satiny mini dress, which she paired with simple jewelry. Brandon wore a black suit and tie with a white button-down shirt.

Both of them held a drink in their hand as they moved back and forth and shimmied around. Brendan put a few moves into his dance by moving from side to side. The two were celebrating the 68th Broadcast Music Industry Country Awards which took place on Tuesday, November 8.

“Actin up tonight at the @bmi awards with @brendanjmcloughlin,” Miranda Lambert wrote in the caption of her video.

Actin up tonight at the @bmi awards with Brendan! (Thanks to preshow @Red55Winery in @WandajuneHome glasses 🍷) pic.twitter.com/Nz44168vdi

Fans took to the comment section to share their thoughts. Most of them were smitten with the couple. They loved that they dance so much together. As they say, the couple who dances together stays together.

Rocks out at the 2022 CMAs red carpet

Miranda Lambert rocked on the 2022 CMAs red carpet. Per People, she wore a sleeveless black and pink vintage Mugler gown that featured a pink slip dress underneath a black lace overlay. The “If I Was a Cowboy” singer paired her look with Aquazura shoes, Gismondi 1754 jewelry, and a Tyler Ellis clutch.

Brendan was her date during the event. She was nominated for three awards at the award show, but walked away with nothing. She has earned several CMA Awards throughout her country music career. During the live televised event, Miranda had to change twice for her performances. She performed “Geraldine” and took part in a tribute to Loretta Lynn alongside Carrie Underwood and Reba McEntire.

What are your thoughts on Miranda Lambert and Brendan McLoughlin shimmying in their latest social media post? Did you love her performances at the CMAs? Do you think she should’ve swept the award show? Sound off below in the comment section.