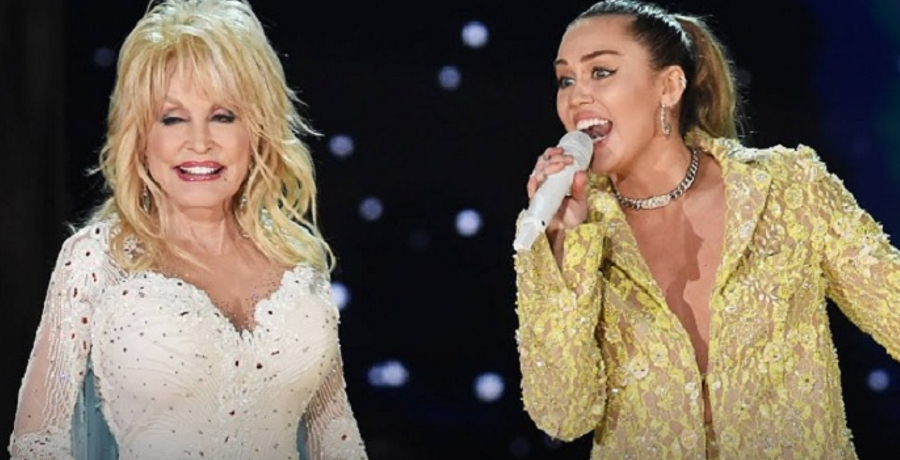 In presence, talent, and passion, “fairy godmother” Dolly Parton, and her “fairy goddaughter,” Miley Cyrus pack a huge entertainment punch. While their styles differ, their hearts beat as one, and fans of both incredibly gifted and giving ladies are wild about the news officially confirmed by Yahoo News on December 3.

Per their social media shares of the same photo, Miley Cyrus and her kindred muse and relative by love, not genetics, make it clear that they are closer than ever and making very big plans for New Year’s Eve in Miami. Certainly, fans are on board for the whole midnight ride.

Black, Gold, And Big Moments For Dolly And Miley

With a happy birthday wish for Miley Cyrus, Dolly Parton gushes that she “can’t wait to celebrate with you and ring in the new year.” Of course, “Aunt Dolly” (as she was known in her Hannah Montana run), sealed her words with a heart.

Affectionately, Miley Cyrus embraces her godmother as only family members do. Her snuggle literally is “blonde on blonde” and “cheek-to-cheek,” with Cyrus in a simple black mini dress. For her part, Dolly Parton playfully poses like she is “falling” into Miley. The country music marvel glistens in gold geometric design laid over black, with shiny black accents added in all the right places.

Beyond their wardrobe, Miley Cyrus and Dolly Parton possess a catalog of hits between them that exceeds that of 20 Spotify sensations. Naturally, everyone craves the harmonies and truth of Jolene, however, surprised crowds revel in one-of-a-kind duets. Don’t be shocked if the two break into a sneak peek of a rocker from the album Dolly promised at her Rock and Roll Hall of Fame induction. Her Plastic Hearts partner is a great source for teaching the perfect rock growl.

Happy birthday @MileyCyrus! I can't wait to celebrate with you and ring in the new year!! ❤️ pic.twitter.com/WTueJPGPBa

The Love Is Legendary

As Dolly Parton candidly affirms, her connection with Miley’s dad, Billy Ray Cyrus, instantaneously grew as the two developed trust and common ground in being “country kids.” Miley met Dolly as a “tiny little girl” around the phenomenal success of Achy Breaky Heart. Cyrus credits both her parents for her irrepressible work ethic. Her godmother serves as her model for treating every person she encounters with kindness. In numerous features, Country Music Alley relates the high regard and respect between these independent and refreshingly honest artists.

According to their charming video announcement, Dolly Parton and Miley Cyrus pledge that the evening on NBC promises to be  “legendary.”  No matter which songs make the setlist, or the number of Diamonds & Rhinestones dangling from the headliners’ hemlines, the love shared through decades creates something legendary.

From her earliest memory, music was as essential as air for Dolly Parton. Still, Dolly Rebecca Parton considered herself to be a great musical prodigy among her siblings, as she reiterates in a Hollywood Life profile.

The one-woman dynamo of entertainment praises her dad for passing on his business savvy. However, it was Dolly Parton’s mother, Avie Lee, who passed on the songs from the old country to her brood of 12. All of the Parton clan sing and play instruments.  Many are past or present performers in the variety shows at Dollywood.

“I don’t know that I’m near as good as some of the others,” Dolly Parton concedes. “It’s just that I’ve taken it farther.” She concludes that hard work and sacrifices for her career are pivotal to her success.

Just in case someone didn’t get enough of Dolly dancing, singing, and spreading joy in Dolly Parton’s Mountain Magic Christmas on December 1, an encore performance of the special returns on December 21. The timing is just right to get ready for Miami, Dolly, and Miley on New Year’s Eve. Get ready for great songs and to feel the love!

Are you excited about Dolly Parton and Miley Cyrus hosting their first New Year’s Eve event together?  Leave us your comments!