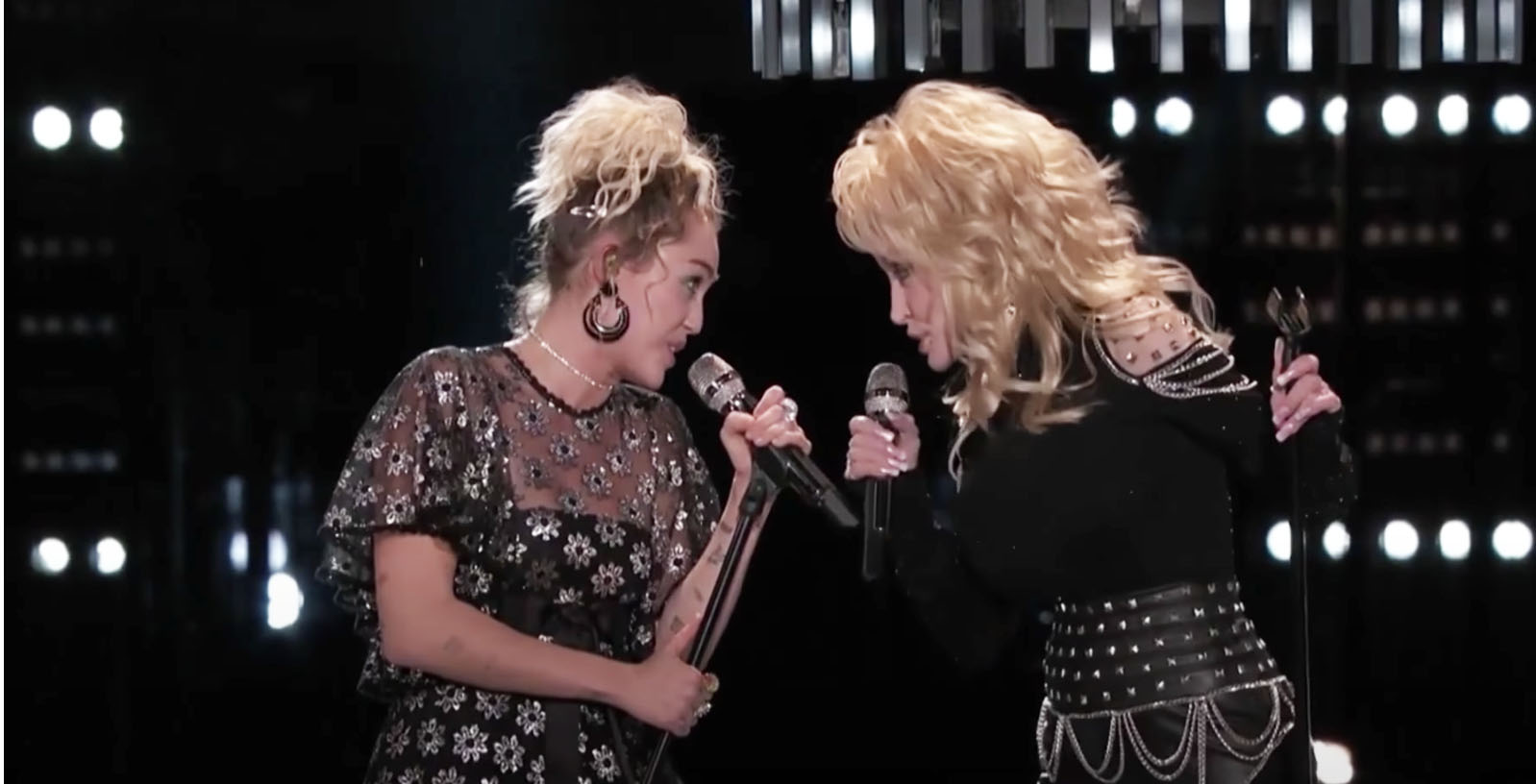 Above and beyond her status as an unrivaled country music queen, Dolly Parton holds the podium in countless hearts as the pandemic hero for all eternity.  When the world fell in the throes of worry and lots of fearful talks but little action, Dolly Parton put up a million reasons to drive the mission to save the world beyond dialogue.  That’s only one example of the humanity in the woman Miley Cyrus calls her “fairy godmother.”

Dolly Parton’s ties to Miley Cyrus span from the time Dolly held the show-stopping Plastic Hearts artist as a “tiny little girl” and even before.  The “When Life Is Good Again” beacon of hope fondly relates her time touring with Miley’s dad, Billy Ray Cyrus, and how “we just kind of gelled” in those early days “cause we’re both country kids.”  Throughout Miley’s incredible but conflicted Disney reign as Hannah Montana, her bonds with “Aunt Dolly” only deepened.  She saw Dolly as more than part of her dear family– Parton embodies a dynamic professional example.

This week, as Dolly Parton takes honors among Time 100’s Most Influential People for 2021, as Country Music Alley confirms.   While innumerable colleagues and collaborators extol Dolly Parton as an artist, philanthropist, and entrepreneur extraordinaire, Miley Cyrus goes further.  Her heartfelt profile personally dedicated to her fairy godmother is a keepsake to treasure that only her goddaughter can give.

Miley Cyrus opens her remarks with an almost rhetorical question for anyone alive over the past two years and then some.  “Have you ever met anyone who doesn’t love Dolly Parton?” Cyrus opens.  “I never have,” MSN p er People conveys.

As it happens, Miley offered a very similar comment last year to Dolly for her Billboard Hitmaker Award for Women in Music.  On that occasion, the adoring Miley notes that the only reason for anyone not liking Dolly Parton “is because they LOOOVE Dolly Parton!”

Consequentially, Cyrus describes that her godmother’s “incomparable career” is only a small part of why she is a role model.  The “Malibu” singer marvels at the “steadfast morals and values” that guide Dolly Parton in every decision.   “At her core, she is the definition of humanitarian,” Miley Cyrus declares.

A radical turn of praise from Miley

Not by coincidence, Miley Cyrus’ recounts her “Aunt Dolly’s” days on the set of Hannah Montana.  The TV niece remembers how her castmates and crew were enthralled with Dolly Parton’s “smell, the way her nails tapped the table, the sound it made when she flipped one of the pages of the script,” all became part of the fascination with Dolly Parton.  “A living fantasy was in front of all of us,” Miley confesses.

Surprisingly, in a twist that only Miley Cyrus conjures about her stellar godmother, she lovingly dubs Dolly Parton as “the world’s most impeccably purposeful walking contradiction.” She notes the juxtaposition of Dolly’s desire to emulate the town tramp in her youth with the almost “saintly, god-like figure” Parton assumes for many today.

In a matter of fact, Dolly Parton endured harsh punishment for her penchant for makeup.  She and her sisters used Merthiolate as their preferred lipstick.  Still, as Miley Cyrus credits, godmother Dolly is steered by the same internal centeredness of “honesty, truth, and her faith”  imparted by her parents in Sevier County, Tennessee.

Pride and grace across generations

Of course, great success and status come with great responsibility.  Miley Cyrus elaborates that Dolly Parton knows the countless people who look to her for guidance.  Cyrus lauds how Dolly “wears that responsibility with the same grace and pride [that] she rocks [in] a two-piece Nudie suit.”  Miley doesn’t go into more designer detail.  However, both she and her godmother understand the impact of every choice in style and substance for their faithful followers.

Before this latest Time recognition, Miley Cyrus already regarded Dolly Parton as “an angel on earth.” Instead, the star “better than your sparkliest dreams” seems more down to earth than ever at 75.  Whether Dolly Parton gives one of her ever-handy hats to a fan, along with a listening smile, a new book for a toddler from her Imagination Library, or literally a lifesaving shot in the arm, she lets every person know they matter in very down-to-earth terms.  As Miley Cyrus reminds, “she leaves no one behind.” It’s no wonder why no one forgets Dolly.

Keith Urban Relies On Marital Devotion For Sobriety?
Kelly Clarkson Listens To Fans & Delivers — Here’s How
Blake Shelton Headlines 2 Major Events, See What
Miranda Lambert Voted One Of Most Influential People 2022
Jimmie Allen Puts The APB Out On ‘On My Way’ With Jennifer Lopez