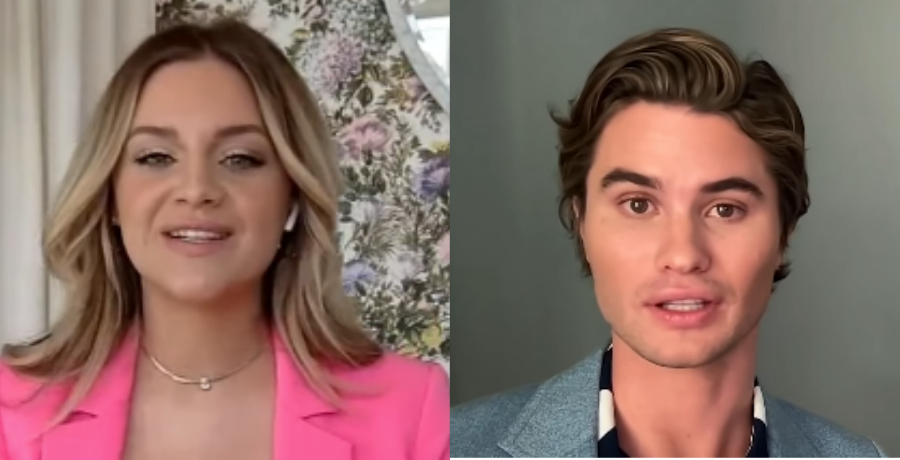 Kelsea Ballerini has fans wondering about her relationship status. The country singer made headlines for her recent sighting with Outer Banks star Chase Stokes. The two snuggled at a football game, leading the dating rumors to swirl. Keep on reading to learn more and see the photos for yourself.

On Friday, January 13, Chase Stokes posted a carousel of photos on Instagram. The actor wrote in the caption: “lil recap.” The photos that have fans buzzing are the ones of him with Kelsea Ballerini. The 29-year-old singer and the 30-year-old cozied up to each other during Monday’s Georgia vs. TCU game at SoFi Stadium in Inglewood, California.

In addition, Todd Graves shared an Instagram photo of a group of actors, influencers, and musicians who attended the event together. He hosted the party in his suite with the famous faces. In the photos that Todd posted on Wednesday, January 11, Kelsea Ballerini and Chase stood close together.

The Outer Banks star wore a plaid shirt over a black T-shirt and light-wash jeans. He also wore a baseball cap. Meanwhile, Kelsea wore a black cropped sweatshirt with light denim wash cut-off jeans. She had her chin on his shoulder. Kelsea also popped up in Chase’s Instagram post, writing “go vols 🙈.”

Fans wanted to know what this meant. It looked like the two were more than just friends. Most of them took to the comment section of Chase’s Instagram post to ask him if he just launched his new girlfriend. Both Kelsea and Chase’s reps haven’t spoken out about the dating rumors.

Chase was last linked to actress and co-star Madelyn Cline. The was last spotted in February 2022. They met on the set of their hit Netflix series in 2019. They became Instagram official just a year later.

Kelsea Ballerini announced her split from Morgan Evans in late August. The couple was married for five years. They finalized their divorce in November 2022. The next month, Kelsea opened up about her decision to end their marriage on the Tell Me About It with Jade Iovine podcast.

“The glitter wears off. That’s what happens. And then you get into a phase where you wait for it to come back,” Kelsea Ballerini explained. “And then sometimes it doesn’t. At the end of the day, it is such a disservice and a dishonoring of yourself if you know something is not right and you stay.”

She didn’t want to feel shame or regret for her decision. Kelsea released her latest album Subject to Change that fall. Morgan released his heartbreaking ballad shortly after their split. Meanwhile, Outer Banks returns for its third season on February 23.

What are your thoughts on Kelsea Ballerini and Chase Stokes? Do you think they’re dating? Would they make a cute couple? Sound off below in the comment section.