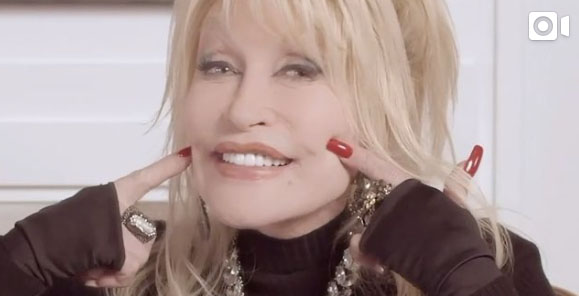 Living country music legend Dolly Parton commands attention just by her presence.  This morning, February 2, the cultural icon dropped in on Today with a special treat for the founding morning show. Dolly is a longtime fan of Hoda Kotb, Savannah Guthrie, Al Roker, Jenna Bush Hager, and the whole Today team.  She even created one of her famous birthday tributes for co-anchor Hoda Kotb awhile back. However, this surprise was about different kinds of teams.

As Today, features confirm, Dolly Parton’s presence commanded the main broadcast and the fourth hour with Hoda and Jenna Bush Hager with a very special preview.  Country Music Alley reported last week that Dolly is partnering with web-building and hosting company, Squarespace, for a Super Bowl LV ad.  This morning, millions of viewers everywhere got an early look at the interlude that will air in the third quarter this coming Sunday.  No matter what the score is, fans will know that Dolly Parton scored another touchdown.

The workday goes from droopy to dynamic with Dolly Parton

Carson Daly introduces the first preview snippet of the ad reserved for the priciest Sunday slots ever.  Needless to say, Dolly Parton gets the current work situation for countless employees to a tee.

While the five o’clock doldrums find office workers dozing off, one ambitious lady rises with energetic living color to leave for her “side hustle” in the “5 to 9” hours.

“You’re gonna change your life– do something that gives it meaning,” Dolly Parton sings as the woman in vivid orange twirls past landscapers, painters, and artists.  Fittingly, the original “9 to 5” composer sings that “a website worthy of your dreaming” will be included in the future plans.”  Only Dolly Parton could give a plug for the sponsor so playfully.  Fans will also have fun watching for the Dolly wink from the cover of a magazine.

In a follow-up interview, Hoda Kotb offered belated happy birthday wishes to Dolly Parton.  The “I Still Believe” songwriter stresses that it “looks like we’re in for some hard times.”  Parton reflects that “We can make it lighter if we just tried a little harder and cared a little more.”  The spiritually intuitive singer holds that people will emerge from the virus stronghold as better people. She says that “God has shown us some stuff that we need to be looking at.”

As far as Super Bowl snacks go, Dolly Parton prefers a “heartier” dish.  Her favorites are pigs in a blanket and potato chips.  Hoda Kotb cheered for the selections.  The versatile artist is also known for keeping Vienna sausage in her pantry.

From her ventures into small-screen series like Heartstrings and Dumplin’ on Netflix to her music and movies over six decades, Dolly Parton’s message has been about love, acceptance, and inclusion.  “Coat of Many Colors” is not only her personal story, like “Girl in the Movies,” it is also the story of anyone made to feel less than for being who they are.  Parton has open arms for all and her record of giving proves that point.

Dolly Parton is trending at the top of every media outlet list for her recent reveal concerning turning down the Presidential Medal of Freedom twice during the Trump administration.  The question of the honor came up again with Hoda and Jenna.  Dolly confirms that the Biden administration has already been in touch, but Dolly is unsure about accepting the recognition, thinking it will look like she’s “doin’ politics.”

The universally-beloved performer first turned the honor down because her husband was ill.  When a second invitation came, Dolly Parton understandably didn’t want to travel amid the COVID-19 restrictions.  President Joe Biden doesn’t just have the pressure of history weighing on the proposed presentation to Dolly, his former boss, and friend, former President Obama, called not giving the honor to Parton “my worst mistake,” noting that Michelle also weighed in on the matter. The Obama’s are huge music lovers, including Country.

“I don’t work for those awards,” Dolly Parton insists. “It would be nice, but I’m not sure I even deserve it.” She thanks her followers for the compliment of thinking that “I might deserve it.”  The songwriter frequently says that all the fans who love her more than makeup for the ones who don’t.   One fan on social media noted that a crown is much more appropriate for Dolly Parton than the medal. Dolly makes it very clear that a statue at the Tennessee state capital is not something she wants now.

A divine scent and loving words for a brother

Dolly Parton loves the idea that today’s generation can still connect to her “9 to 5” rework in a relevant way.  She also admires how younger people now are making their own career opportunities and chances.  Another reason she enjoys the pairing with Squarespace is the company’s agreement to promote her namesake fragrance.  She teases that the smell is “heaven-SCENT,” with an “angelic” quality.

Grieving a lost loved one is still a process every day for Dolly Parton and her family.  The singer’s brother, Randy, passed away from cancer only two days after Dolly Parton’s birthday.

“We loved him and we’re still grieving,” Dolly Parton declares.  “There’ll always be an empty spot there” where Randy Parton lived, loved, and entertained.  The brother headlined the family show at Dollywood from the time the attraction opened in 1986.  He sang with his older sister on “You Are My Christmas” from her holiday collection, A Holly Dolly Christmas, along with his daughter, Heidi, on the high harmonies.

“He filled up a lot of space in our lives,” Dolly Parton speaks of her brother.  “He’ll always be treasured.”

Through her loss, Dolly Parton feels a kinship with millions of families who grieve the loss of family.  Randy Parton chose to be cremated.  Parton noted that “in the spring when the weather turns, we’ll have a memorial, and scatter his ashes where he wanted them to be.”

From Super Bowl joys to the jolts of grief through life, Dolly Parton teaches lessons in grace.