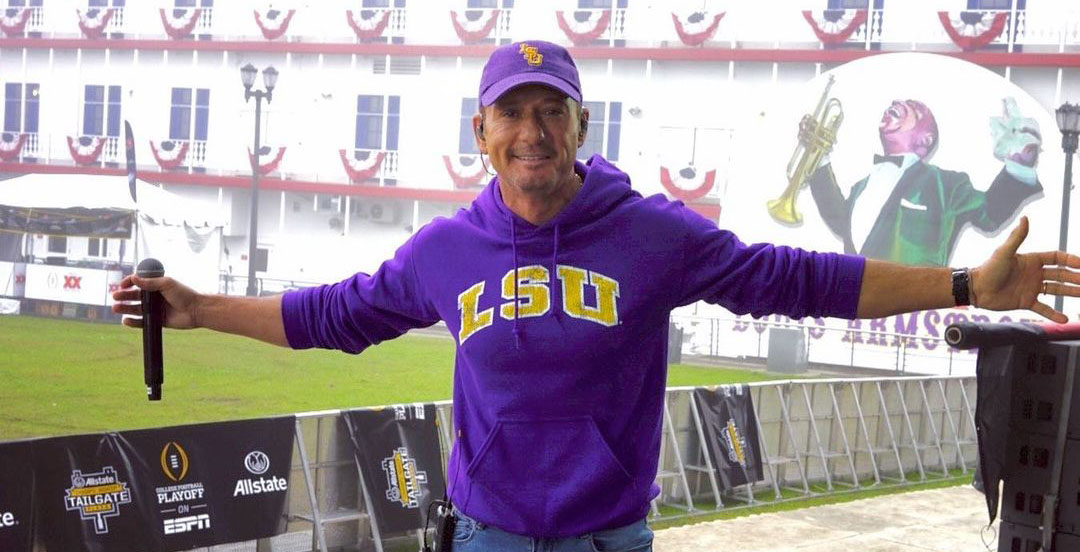 Country music megastar Tim McGraw is most likely familiar with the old adage “A son is a son till he takes a wife, but daughter’s a daughter all of her life.”   On film, McGraw brings forth the dark, delightful, and devoted side of parenting both sons and daughters in Flicka, The Blind Side, and Friday Night Lights. The actor and artist also has a pivotal role in the wrenching, yet uplifting saga of a father’s grief in the screen adaptation of William Paul Young’s The Shack. He also sings the theme song, “Keep Your Eyes on Me,” with his astounding wife of almost 25 years, Faith Hill.

Themes of faith, fatherhood, and family weave through every Tim McGraw album.  From “Love You, Goodbye” to “You Had to Be There” and “My Little Girl,” the hitmaker makes it clear that being a father is job one in life.  Tim McGraw feels honored in becoming a godfather to good friend, Garrett Hedlund’s baby son, Rhodes, with Emma Roberts.  Nonetheless, any parent who understands the simultaneous sensations of satisfaction, pride, and the parting of the empty nest syndrome feels for the famous dad.

Goodbyes to  the girls are tough on Tim McGraw

Tim McGraw, the father, recently talks about ways that he and Faith made sure their girls, Gracie, 23, Maggie,21, and Audrey, 19, stayed priorities despite the demands of touring, projects, and maintaining two high-profile careers. McGraw insists that their now-grown daughters took valuable lessons in work ethics and being “present” for the people who matter most in life through their experiences growing up.

It’s only natural that Tim McGraw finds himself in a reflective and wistful mood as memories through the years come flooding back.  The man famous for singing songs like “If I Was a Cowboy” from his Here On Earth album shows complete out-of-this-world love for the independent, giving young women sharing the name McGraw.  Dad’s heart is on his sleeve and in his throat in features from Today and People.

Some of Tim McGraw’s fondest times with his daughters took place on the softball field and the basketball court.  T-I-M-E is an alternate spelling for L-O-V-E to any child, and Tim and Faith aimed for their investment to show their daughters that being in their lives mattered more than the girls being part of their world.  The McGraw home was a sanctuary.  When its drawbridge lifted, the business world and music industry matters dissipated.  Friends called the parents “Mr. and Mrs. McGraw,” and saw them with other parents at PTA meetings.

Even with the best intent, parenting is tough.  Tim McGraw has no delusions of greatness when it comes to being a father.

“You think you’re giving them good life lessons,” the “Humble and Kind” musician states, before quickly, reminding that “You’re going to get half of everything wrong,” and that’s on the good days.  “That’s just the nature of it,” McGraw concludes.  “There is no handbook with it.”

Cherishing the beautiful and the sad

Tim McGraw never shies away from showing emotion, in song or in life.  It’s easy to almost feel the lump in the father’s throat and the “something” in his eye as he describes the phenomenon of seeing Gracie, Maggie, and Audrey grow up and leave their nest.

“They grow up so fast… It’s a beautiful thing.  But it’s a sad thing at the same time,” McGraw confesses.  The father of three calls it “unfathomable” how so much time has passed so quickly.  He describes “marking time” by the periods in his daughters’ lives.  In surprise, Tim notes how “every two years, there’s a different child that you have as they age.”

Papa McGraw has nothing but wonder and glowing praise for the “three beautiful headstrong [insert laughter], strong-willed, smart, self-confident daughters that we have,” relates the patriarch. He also gives profound thanks for how they have “made me such a better man,” in Tim McGraw’s words.

No girl outgrows a father’s heart

No one is surprised that all three McGraw daughters inherited the pipes to sing.  Gracie McGraw is a beacon for self-esteem and body-acceptance in all she does.   Last November, the aspiring Broadway singer belted out “The Wizard and I” from Wicked in flawless form from the four walls of her apartment.  Positivity and encouragement radiate from her spirit and Tim McGraw gushes with love for his eldest daughter, with the “sweetest, kindest heart in the world,” as the dad shared in a birthday post last year. Gracie proves the size of her heart because she is “always there for her friends. Always there for her family,” according to the parent, and always ready to lend her boisterous laugh.

Maggie McGraw did some singing with the family dog, Stromboli, last Christmas.  The middle daughter’s selections were more slanted to the opera vein, and the dog delivered with his nose raised high. Kelly Clarkson was impressed.  Even more impressive is Maggie’s involvement with CMT as vice president for the “Feed the Frontline” initiative to support Nashville’s frontline workers.  Tim McGraw and Faith Hill recruited a few more friends in country music to help the cause.  Giving back and living with purpose are principles ingrained in her upbringing for Maggie.  Her study of oceans and climate at Stanford University seems to suggest that her calling lies in nature and humankind’s future and not the stage.

The last songbird sets out on her own

Tim McGraw hardly wraps his head around the reality that youngest daughter, Audrey, “is living in New York City” and finding her heartfelt mission in life.  Her dad shared a moving salute in birthday love on social media last December, just before Audrey soared from the family nest.

Doting on the “lil punkin” who’s been a “million-watt light in our lives since she arrived,” Tim McGraw more than memorializes her early arrival of eight weeks.

“You are a steadfast friend,” dad McGraw compliments. He continues, lauding how Audrey is “always willing to listen and learn.”  “I admire you,” the loving parent closes.  Tim McGraw knows the power of words to burrow deep in the heart.  No trinket or jewel Audrey McGraw acquires will outshine her father’s admiration.

Faith Hill heaped on more love for the youngest daughter.  Her mom shared one of her many impromptu performances from Audrey of every song from Across the Universe. Mama recalls that the Lennon-McCartney saga scored 100 viewings—“ maybe more” from the budding singer. Tim McGraw joins Faith in commending the constant love from her siblings for ensuring she would “conquer the world.”  Dad only guides her to “lead with your solid gold heart” and “work your tail off.”

Conquering the world is a tall order, and getting harder all the time.  With love and faith, including a mother named Faith, anything is possible.  Tim McGraw isn’t a perfect parent, but he and Faith planted seeds of faith, love, and determination to grow for a lifetime in their daughters and be passed on from them to their children.  Getting used to life without the bustle of activity from the beautiful girls is tough, but no one knows when little feet will run down the hall to greet their grandpa and grandma, still plenty young enough to play long and hard.