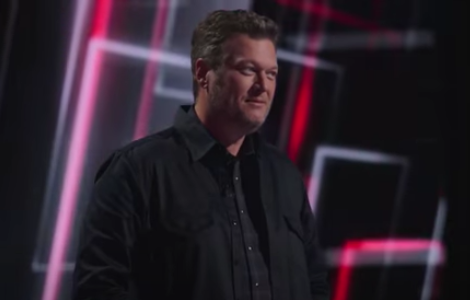 The Voice has seen the judges use some crazy tactics to convince contestants to join their teams, but Blake Shelton may have just taken the cake. This week’s blind auditions were impressive and memorable. But what may have stuck out the most was how hard Blake tried to convince one contestant to chose him as her coach. Blake has not been shy about using his connections to sell himself before. Shelton has also resorted to some pretty shameless tactics even being called the “king of BS.” Does anyone remember his dead cat story from 2019? But this time Blake may have gone just a little too far by bringing his fiancé, Gwen Stefani in the ring and making wedding and baby jokes.

So, who had Blake Shelton resorting to unseemly desperate tactics this time? That would be Pia Renee of Chicago. Renee came out and gave an impressive rendition of Stevie Wonder’s “Master Blaster (Jammin’)” with a bit of a reggae twist. Pia showed off her impressive range and talent as she hit the highs and lows of the song with ease. All of the coaches were impressed by different aspects of her performance but none of them turned their chairs around until the eleventh hour. As Renee was closing out her performance Blake hit his button. But to Shelton and probably everyone’s surprise John Legend gave new meaning to coming in under the wire. Legend followed Blake’s lead and hit his button on the very last note of the song.

As the rest of the coaches turned around Blake was understandably dismayed to see that John would be competing with him. Kelly asked Blake how he felt about John turning his chair around, and Blake seemed to accept his inevitable defeat. “I feel like I am getting one last look at her,” Shelton admitted. But, in spite of the odds against him, Blake put up a fight to convince Renee that they could be a good match relying heavily on his experience as a coach. “This might seem like an odd pairing, but I have a lot of experience on this show. A lot!” Shelton emphasized.

Nick Jonas told Renee that he thought she would be a “force” on the show and agreed with Blake that the two were an odd pair. But he also said, “When Blake turned his chair around, I got very excited because I like the idea of this unexpected coaching/artist duo.”

Blake Shelton made a heroic effort

Even though Nick made an interesting pitch for Blake the battle was all but decided when Legend asked Renee who her influences were. Renee told the coaches that she performed soul, R&B but reggae is her passion. John started name-dropping reggae artists and Kelly asked Blake if he knew who Legend was talking about. And although Blake tried his best it was obvious that he was completely lost. John continued to throw shade at Blake. “One of us knows the music you want to cover, and one of us has no clue.”

But never let it be said that Blake Shelton goes down without a fight. Blake fired back at Legend’s claim that he knew nothing about reggae by mentioning Gwen Stephani’s influence on him. Gwen has roots in reggae/ska/pop from her No Doubt origins. And she released a new single “Let Me Reintroduce Myself” in 2020 returning to those roots. Blake tried to utilize his relationship with Stephani to his advantage. “[B]y the time this airs, Gwen Stefani could even be my wife by then!”  He even went so far as to declare, “She’s delivering twins right now! She’s pushing them out! But I’m here, working.” Maybe a bit over the top there Blake.

But in the end, Legend turned Blake’s effort around on him. “Wouldn’t it be great if she [Stephani] was here to coach you,” Legend quipped, “Gwen is great, but Blake is not Gwen.” When the final decision was made Pia chose John Legend as her coach. Night four ended with six contestants for Nick Jonas, John Legend and Blake Shelton. Kelly closed out her night with five. The Voice will return on March 15 with the coaches continuing to battle for the best voices.