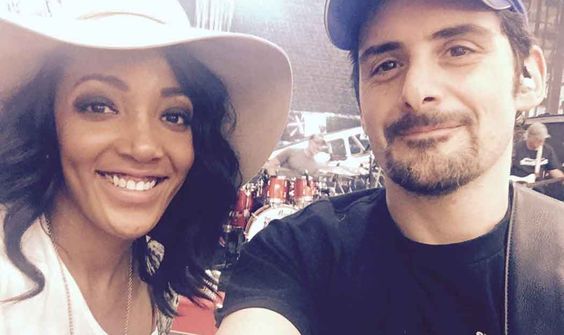 Country songstress Mickey Guyton had many reasons for her luminous glow on Sunday night, March 14. Grammy Awards don’t just happen on any old Sunday. Notably, the Grammy-nominee takes her place in history this year for several more firsts.

Mickey Guyton’s run through the annals of country music started last September when the singer-songwriter took the stage at the ACM Awards as the first Black woman ever to perform at the hallowed ceremony.  She struck truth into every listening heart with “What Are You Gonna Tell Her?”  After 10 years of striving and honing her gifts as a country music artist, audiences heard Mickey Guyton with new ears.  Two months later, she was a presenter for the Grammy-nominees when Mickey Guyton made more history.

She gets the surprise of her life in the news that her powerful anthem of racial injustice and social inequality, “Black Like Me,” garners the 2021 nomination for Best Country Solo Performance. The moment means more than merely making history for Mickey and she doesn’t hold back her tears.   More than ever, Mickey Guyton embraces her role as a mentor and “a door opener” for women and more unheard or “unconsidered” artists of color.

In deeply personal and professional ways, this Grammy Sunday was no less sacred for Mickey Guyton.  She donned glimmering gold and sang with gospel integrity on her uncompromising ballad from the worldwide stage, as noted by CBS News and Rolling Stone.  A very special little fan at home also gives Mickey Guyton a new purpose in all she does.

From any stage, Mickey Guyton delivers golden power and presence

On an evening of lifting golden gramophones, Mickey Guyton makes herself a vision in a flowing, fitted gown shimmering in speckles of copperish gold.  Performances were the highlight of this year’s 63rd Grammy celebration, split into five stages.  Nominees brought one invited guest each, seated outside the Staples Center.  Many of the performers stayed as enthusiastic audience members for one another, including Mickey Guyton.

From the distance in the opening of “Black Like Me,” Mickey Guyton resembles a stately golden figure.  One of Guyton’s most natural and innate gifts as an artist is that she knows what her voice can do.  She takes an almost conversational tone in the first verse of the “little kid on the playground” scoffed “when they said I was different.” Countless fans feel complete empathy as they insert their own words for “black” in the title for their own different experience.  In this era crying for equality and at least an effort to create a fair playing field in light of so many senseless losses of life, “black” is essential and defines the composer’s personal truth.

The exquisite tones of a single pedal-steel opened to reveal an assembly of players in the round, illuminated by light. A gospel chorus rises in kindred spirit by the second chorus, and it feels impossible to hold back the tangle of emotion when Mickey Guyton sings the affirmation that “I know I’m not the only one who feels like I– I don’t belong.”  Few performers of any genre possess the vocal prowess to evoke such truth and conviction in a single line.  Mickey Guyton once more proves that she definitely belongs among the premiere talents in country music.

No pulpit, but plenty of conviction

“Someday we’ll all be free!” Mickey Guyton beautifully exclaims before ending with “and I’m proud to be Black Like Me” two times to close the performance.  Guyton heard the applause in her stage area, but she had to feel the thunderous cheers of validation coming from every corner where her fans were watching.

It turns out that Vince Gill got the trophy in Mickey Guyton’s nominated category, as Taste of Country confirms. Fortunately, however, his song “When My Amy Prays,” is a dedication to his cherished wife of more than 20 years, Amy Grant.  The beloved Christian music veteran-related her open heart surgery experience in a Country Music Alley profile last month.   Amy is a good friend and supporter of Mickey Guyton.  After Mickey shared a song quote to accompany a stunning pregnancy photo on social media, Grant replies, reminding Guyton that her baby boy is “your greatest accomplishment.”  Very true, but Mickey Guyton deserves her Grammy moment.  Some girlfriend sisters from Texas enjoy the moment with her, too.

The 2021 Grammys celebrate women in many ways.  The proceedings become a ladies’ night very quickly with Meghan Thee Stallion’s opening nod in taking a trophy.  Beyoncé broke Grammy records in earning the most Grammys of any woman in history, bar none.  Taylor Swift was giddy with appreciation and took the Album of the Year honors for a record third time.  Billie Eilish was gracious to a fault to Stallion after her presentation for Record of the Year.  Queen Bey and Meghan broke social distance protocols with their hugs and handholding, but still, the unity was palpable and nice to see in these divided days.

Mickey Guyton purposely includes “representation” in her Grammy performance.  “I want people to feel that they’re coming together,” the songwriter stresses.  “This is a huge moment for black people in country music.”

The moments after her performance become a celebration of Texas-girl giftedness.  The 37-year-old Arlington native, Mickey Guyton, introduces Miranda Lambert as “the one and only,” as Miranda gives a tiny wink in Guyton’s direction from her separate state.  Lambert naturally chooses a sparkler in blue to sing “Bluebird” from the Lindale, Texas native’s awarded Wildcard album.  In turn, Lambert shares her memories of knowing Maren Morris from early days “in the honky-tonks” before the petite singer in brilliant red, also from Arlington, tears into a particularly passionate rendition of “The Bones,” with some raucous electric guitar.

Mickey has all the reason she needs

No one knows whether Mickey Guyton got the chance to ask Maren Morris any advice on parenting a baby boy between rehearsals.  Keith Urban assured Mickey that he expects to see baby pictures when the two team up for their rehearsals for the upcoming ACM Awards next month.

The super-proud Mickey Guyton delights in presenting People with a precious peek at one-month-old Grayson.  The infant plays shy, covering his sweet face with his tiny fingers.

One of the parent’s biggest surprises is the dramatic change in her body over the weeks since birth. Guyton praises how her husband, Grant Savoy, handles the rigors of baby duty while she had Grammy preparations.  Nonetheless, nothing stops the doting mom from getting up at 4 AM, “when I hear him whimper,” Mickey Guyton details.

“There’s no better feeling,” Mickey Guyton insists in describing holding the baby that was part of her body for so long.  The “Heaven Down Here” singer already predicts that Grayson will be a “calm, independent child.” She cites that he already likes autonomy, but “he’s really sweet” with a good appetite.  Mickey Guyton always displays her gift with words, but when it comes to her son, she can’t say “sweet” enough times.  Everyone understands the repetition.

“Literally, he is all I think about,” Mickey Guyton confesses of her newborn.  “He’s my reason. I’m doing all of this for him,” she speaks of her musical legacy. “I just want to make him proud.”

More Grammy stages and stellar venues lie ahead for Mickey Guyton, and the next time she gives a spellbinding performance, Grayson and Grant can cheer her together.