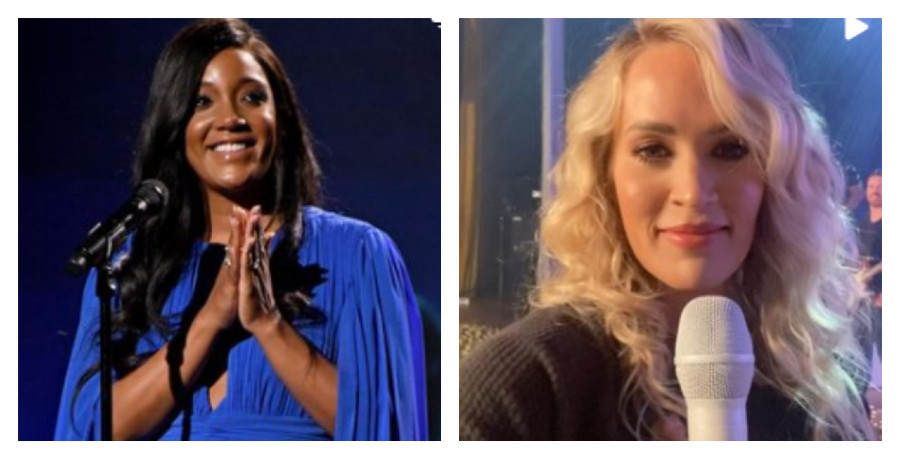 Consider it a given that country music queen, working mom role model, and good friend of Mickey Guyton, Carrie Underwood, knows more than a thing or two about growing boys and perfect baby gifts.  Assuredly, the CALIA fitness and active-wear entrepreneur celebrates her beautiful boys, Isaiah Michael and Jacob Bryan, as gifts from God, as well as her career.  Nonetheless, the My Savior artist empathizes with the balancing act that every mother faces in meeting the needs of work, family and the inner soul.

It’s never too early to feed an artistic spirit, or a beautiful baby boy, either.  As Taste of Country and CMT News note, Carrie Underwood chose the perfect gift to delight Mickey Guyton and her son, Grayson.  It has a few less keys than the real thing, but his little grand piano sounds just fine for his songs.  The thoughtful present really gives mommy a lift, too!

Music, comfort, and joy come to Mickey Guyton and baby in the mail

Not by coincidence, Mickey Guyton and Carrie Underwood devote much of their public platforms to issues of working moms, as Country Music Alley covered in June.  One of Underwood’s key philosophies is that mothers must “choose you” as a priority in order to be the best in all the other roles that mothers, and women as a whole, often juggle.  Very shortly after the birth of Grayson Clark in February, Guyton gave interviews holding her infant son.  The “What Are You Gonna Tell Her?” singer-songwriter makes it clear that her son’s needs and schedules will meld with whatever professional commitments and activities continue in her rising career.  One role does not exclude the other.  With devoted husbands and their own loving support systems, Carrie Underwood and Mickey Guyton serves as a powerful examples in devoted parenting and dynamic artistry.

Speaking of devoted dads, one is likely behind the camera in the too-cute-for-words video that Mickey Guyton shares of her virtuoso five-month-old on the piano bench sent by Carrie Underwood.   “Grayson, are you the piano man?” questions the tender male voice.   While mommy Mickey lends both hands to stabilize her fascinated son, he launches into a two-handed sonata of his own, along with a giggle!

“I was having a rough day when this showed up in my mailbox,” Mickey Guyton captions the video.  She continues, gushing that “@carrieunderwood got my baby a piano!”  Guyton gives thanks to her country music soul sister “from the bottom of my heart.”

Glowingly, Mickey Guyton praises that “to watch him light up as he plays”  provokes “the heart explosion I didn’t know I needed.”  Needless to say, all those memories of the rough day evaporate into the ether of mommy and daddy joy.

I was having a rough day when this showed up in my mailbox. Then I opened it up to see that @carrieunderwood got my baby a piano! Thank you from the bottom of my heart. To watch him light up as he plays is the heart explosion I didn’t know I needed. 🥺 pic.twitter.com/DF0EXXdqAX

At this year’s ACM Awards, Mickey Guyton took rare and history-making honors in co-hosting one of country music’s greatest nights with Keith Urban.  Carrie Underwood chose the incomparable CeCe Winans as her partner in stirring souls as never before with their duet on “Great Is Thy Faithfulness” for the momentous night.

As it happens, Mickey Guyton gives thanks to Carrie Underwood for more than the precious tiny piano that Grayson can cherish and play for years to come.  Long before the “Black Like Me” singer became a Grammy nominee for her unflinching ballad of personal truth and equality, Guyton relates how Carrie Underwood gave her an unforgettable gift of strength, calm, and confidence through a word of prayer.

Mickey admits openly that she was beyond “a nervous wreck” prior to her performance of “I’m Standing with You” for the 2019 ACM Awards.  It was more than the usual jitters for Mickey Guyton.  She did not eat for four days.  She found the right dress only hours before taking the stage– the seamstress sewed in the middle of the night– and let’s just say that hubby enjoyed the thrills of Vegas more than the anguish of his bride at the time.

“She’s such a pro,” Mickey Guyton describes of Underwood.  Noting how Carrie handles everything with immaculate calm and how she herself was “a deer in the headlights,”  Guyton overflows with gratitude.

“She hugged me and prayed over me,” Mickey Guyton remembers.  “It was a moment of her saying ‘You got this. God’s got this.’”  After the powerful boost in believing, the singer shined in the all-star number featuring Chrissy Metz, Lauren Alaina, and Maddie & Tae trading emotional harmonies with Carrie Underwood and Guyton.  The ladies left the audience in tears.

Fortunately for little Grayson, lots of Mommy’s friends are good at being generous.  Another social media post captures a photo of Mickey Guyton’s curly-headed doll digging into Jimmie Allen’s empowering new children’s book, My Voice Is a Trumpet.  Mickey has the chance to reciprocate the gesture in November, when Jimmie celebrates the arrival of his second daughter with his wife, Lexi.

The piano makes a perfect gift for Grayson’s budding talent.  However, when it comes to Carrie Underwood’s latest music, save that for later.  A baby’s tender heart is far too young to take in a break- up song like “If I Didn’t Love You,” which she just released with Jason Aldean.

Hopefully, no hurt like that ever comes for the little boy who rules his parents’ universe with every new milestone or sweet smile.  At the same time, mommy Mickey Guyton looks forward to her debut album release on September 24.  With faith, determination, more than a few tears, and talent (along with a terrific toy piano), everything is possible.

Country Music Alley keeps you current on all the latest news and new music from your favorite artists– make it your country music home!