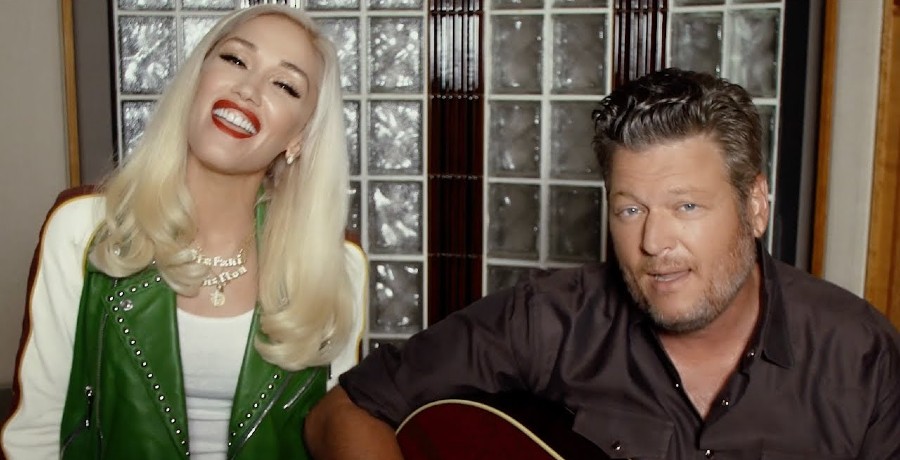 Gwen Stefani and Blake Shelton are currently on their Honeymoon Tour. It’s an interesting way to cash in on their wedding. The musical couple has been touring the nation while declaring their love for one another. Gwen and Blake took to the next level with their rendition of No Doubt’s breakout hit “Don’t Speak.”

It’s one of the many songs they perform on their tour. It’s also one of the songs that get the crowd going. For some reason, they’re still surprised whenever Gwen steps onto the stage. It comes as no surprise to us as they’ve been doing this on every tour stop.

Blake Shelton is currently on his Heroes and Friends tour. His wife Gwen Stefani has shown up to most of his shows. Fans are still in shock to see the blonde beauty perform with them. The couple who performs together stays together. That’s the case for most couples in country music. Gwen performed one of her songs in their latest stop.

She took to Instagram to share a clip of herself singing “Don’t Speak” while Blake strums along on his guitar. She captioned the video: “#dontspeak @blakeshelton on guitar gx.” Fans are loving the fact that Gwen convinced her husband to perform this song with her. Although the couple is happy in love, they performed this breakup ballad with such passion.

Gwen appeared on the stage in a plaid yellow shirt, which she paired over a white tank top and black denim cutoff shorts. She wore her trademark platinum blonde hair down with a middle part. Gwen also had on her signature gold jewelry and red lipstick. Both Gwen and Blake rocked out to the ’90s jam. Most fans were impressed with how well Blake played the song on his guitar. Some think it’s so cute that he learned it so they could perform it together.

Gwen Stefani and Blake Shelton want to make music together

While Gwen Stefani can’t get Blake Shelton to write music with her, she’ll get him to play a few of her hit songs. The video came from their performance at the village of Put-In-Bay, Ohio. She was clearly in her element when she sang the ska-punk song. She also wore her signature No Doubt look, which she paired with orange scrunched boots.

Blake enjoyed playing the tune for the roaring crowd. The 45-year-old smiled as they cheered. He wore his usual outfit of a black button-down shirt and blue jeans. “Don’t Speak” came out in April 1996, and was featured on No Doubt’s third album Tragic Kingdom. Earlier this year, Gwen celebrated the 25th anniversary of the band’s popular song.

The duo also performed their duets “Happy Anywhere” and “Nobody But You.” They got married on July 3, 2021, on Blake’s ranch in Tishomingo, Oklahoma. Since then, the couple split their time between Los Angeles and Oklahoma. Gwen will embark on her Just a Girl residency this fall.