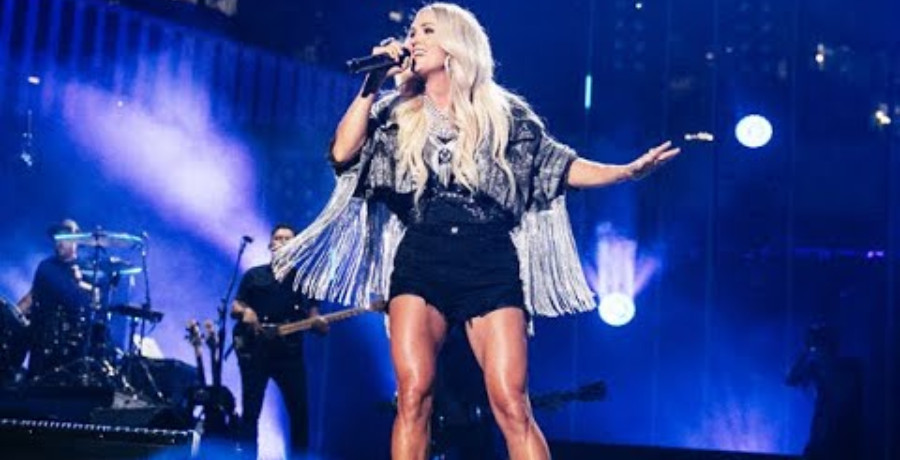 Carrie Underwood shared a new look that drove her fans wild. The country singer took to Instagram to share a behind-the-scenes photo from her upcoming Las Vegas show. It’s less than a month until she goes to Sin City. Carrie will be taking over the city with her Reflections residency.

Over the summer, the singer announced that she will have her own Vegas residency called Reflection at the Theatre at Resorts World Las Vegas. Carrie is sharing what’s happening in the city that never sleeps. She teased her fans with a photo that showed off her toned legs in black booty shorts.

Earlier this week, the American Idol alum shared a photo from the Las Vegas set. In the photo, Carrie Underwood poses as she shows off her long, lean legs. She wears a black blouse with black booty shorts. She paired her ravishing look with black ankle boots.

The “Casanova” star poses with her hands on her head as she shows off her muscular legs. Carrie has been committed to her workouts and it shows. She does a little pose with the green screen behind her. It looks like she’s promoting her upcoming Las Vegas residency.

She directed her fans where they can score tickets. Some of them took to the post to share that they got their seats and they can’t wait to see Carrie perform live. Others couldn’t stop talking about her legs. “I’m ready Carrie, I’ve got my tickets! ❤️,” one fan wrote, while another added, “Your legs are ready! 😳😮🔥”.

It’s not a wild time for her. Carrie plans to bring her entire family with her. She told Entertainment Tonight that her husband Mike Fisher and their two sons, Isaiah and Jacob, will be joining them. It’s unclear how long Carrie’s residency will last.

The song that vanished from the internet

Carrie Underwood is also gearing up for the release of My Gift (Special Edition). She was expected to release a new song titled “Stretchy Pants.” No, it’s about her booty shorts. The song is a comedic holiday song about eating so much around the holidays that you need your comfiest pants.

The song mysteriously vanished from the internet. “Stretchy Pants” made its debut on Friday, November 5 only to disappear again. The song dropped from all streaming services for reasons unknown. However, it’s still available to listen to on Spotify.

Carrie Underwood fans took to social media to share their disappointment. My Gift (Special Edition) will not feature the song. Instead, it will include the new tracks, “All Is Well,” “Favorite Time of the Year,” and “Let There Be Peace/Something In the Water.”

Miranda Lambert Voted One Of Most Influential People 2022
Jimmie Allen Puts The APB Out On ‘On My Way’ With Jennifer Lopez
Maren Morris’ Tour Bus Is Far From Humble
Blake Shelton Headlines 2 Major Events, See What
Keith Urban Relies On Marital Devotion For Sobriety?