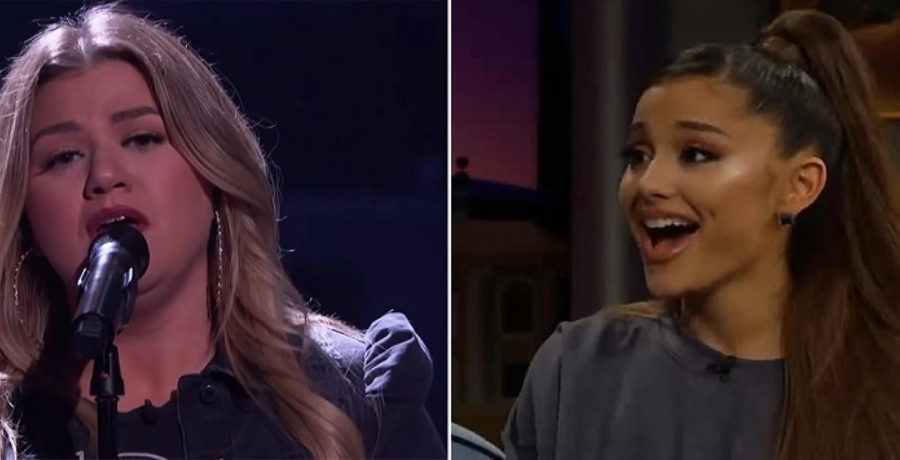 Kelly Clarkson sang her rendition of “7 Rings” by Ariana Grande, and now fans are “gagging.” Her Kellyoke cover has gone viral on social media. Ariana and Kelly performed their new duet “Santa, Can’t You Hear Me” in Kelly’s holiday special. Now, she’s back to making headlines for her Kellyoke covers.

The 39-year-old singer wowed fans with her epic rendition of “7 Rings.” She performed the song during Friday’s Kellyoke segment on The Kelly Clarkson Show. The pop star proved why she’s the first American Idol winner. This performance showed that Kelly can sing anything that she puts her mind to.

Kelly took the stage for her performance of “7 Rings” by Ariana Grande. The pop star’s music is rubbing off on the singer-songwriter. Ariana and Kelly have been collaborating a lot together lately. Fans can’t get enough of their budding friendship.

The two have become good friends since Ariana joined The Voice. On Friday, Kelly kicked off her daytime talk show with the singer’s hit song. She wore a black patterned dress with a wide belt and black boots. Kelly showed off her impressive vocals, which included runs and riffs.

She even added some sassiness to the song. The “Christmas Isn’t Cancelled (Just You)” singer playfully winked at the camera. Kelly managed to put her twist on the 28-year-old’s song that blew up on social media a few years ago. This comes after the two divas faced off on Jimmy Fallon’s new game show, That’s My Jam.

During one segment, they both gave their best impressions of classic pop songs. Kelly and Ariana left each other stupefied. They even left Jimmy Fallon and Blake Shelton in a state of shock. It’s nice to see two divas supporting each other rather than competing with each other.

Fans are looking forward to more collaborations with Ariana and Kelly. It’s clear that the young singer is inspired by the AI alum. On Instagram, Kelly revealed how their friendship started. She came across some of Ariana’s covers and was impressed with the young aspiring singer at the time.

While Kelly always makes headlines for her Kellyoke covers, fans can’t stop buzzing about this one. A short 35-second clip of her “7 Rings” cover went viral on Twitter. As of Saturday, December 4, 3.2 million people watched the clip. The video shows Kelly’s running riffs on the spoken lyrics.

Over 126,000 fans liked the post and over 24,000 fans have retweeted it. Another fan retweeted the clip and added, “So glad I did my civic duty and voted for her every damn week in 2002. Look how we benefited from that.”

So glad I did my civic duty and voted for her every damn week in 2002. Look how we benefited from that. https://t.co/yd9occ95NR

What are your thoughts on Kelly’s cover of “7 Rings”? Do you love the friendship between Kelly and Ariana? Sound off below in the comments.