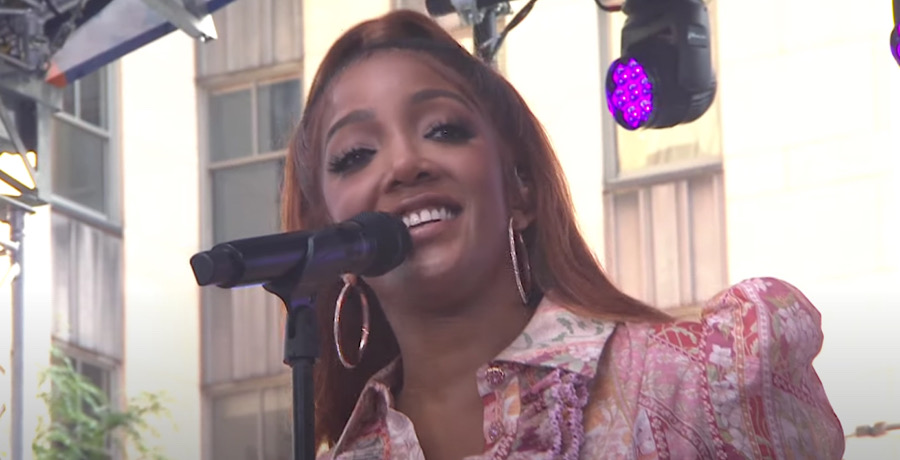 Perennially, country star Mickey Guyton feels right at home on the Today stage. It’s no wonder why the morning broadcast keeps the welcome mat rolled out for the Remember Her Name artist. Yes, another morning show host, Gayle King, surprised Mickey Guyton with a dream come true– meeting one of her most inspirational “she-ro’s,” Dolly Parton, several years back. Still, the Today crew championed the groundbreaking Black Like Me singer-songwriter fervently as her star rose in the country music stratosphere.

Speaking of crews, Rockefeller Plaza was filled with a bevy of Mickey Guyton fans. As it happens, the star from Arlington, Texas brought her own crew of faithful supporters for the AM appearance. One very enthusiastic VIP brought Mickey to moving tears at the close of her opening number. The feeling is mutual between the performer and the show that life-changing moments happen from the stage to the crowd.

Only last September, Country Music Alley detailed Mickey Guyton’s celebration on Today for the release of her debut album. For that occasion, the Love My Hair singer donned a curve-hugging white midi-dress belted at the waist. Although the dates on the calendar are not that far apart, Guyton looked like a spring garden in flowing floral shades of pink and peach in her billowy mini-dress. She contrasted her look with black suede thigh-high boots. The attire proves perfect for belting out her second-to-none choruses.

Moments before taking the stage, Mickey Guyton demonstrated her favorite role–being a mommy. She strolls within the sectioned pathways surrounding the stage. The mama tenderly held her now 18-month-old son, Grayson Clark, with her husband, Grant Savoy. Of course, within nanoseconds, the precious toddler charms waiting for fans and co-anchor, Hoda Kotb. Occasionally flashing a sweet smile, the little man seems quite content mouthing the lanyard with his mom’s credentials. On the other hand, mommy Mickey feels overwhelmed with emotion even before the close of her opening number. The support of her husband moves her to tears.

Mickey Guyton tells the back story of Lay It On Me

No listener on the planet disputes the raw, unapologetic truth of a Mickey Guyton song. Unquestionably, pure, sincere devotion and love radiate through every line of the lyrics in Lay It On Me. Naturally, the writing process of the ballad poured out emotion for the sincere songwriter.

Clearly, though, even the performance of the tender verses catches Mickey Guyton off-guard. Right after the closing chorus, Guyton glimpses in the direction of her husband, holding their son. “I love you, baby,” she chokes out in meaningful tears.

Grant covers his face with the brim of his ball cap. He tries not to throw his multiple Grammy-nominated wife off of her game.

Later, Mickey relates how Lay It On Me was the musical love letter she wrote to her husband during a time when “he was going through some health issues.”  “It was so debilitating,” Mickey Guyton describes the experience, recalling “I didn’t know how to help him,” and for a time, neither did medical professionals. These days, however, all is well for the family, both on personal and career fronts. Mickey Guyton admits that at the moment, it was just “too much” to contemplate all the blessings.

Mickey further confesses that marriage and caring for a growing toddler is a total team effort. She introduces the “village” comprising her team, from managers to her hairstylist, who all pitch in to help with Grayson. As expected, her parents, who “look like children,” according to Hoda Kotb, along with his aunts, never mind babysitting duties, either.

On a lighter note, Mickey Guyton turns to her new collaboration with Tyler Hubbard of Florida Georgia Line, Somethin’ Bout You. The bouncy, rhythmic tune puts the singer and her stalwart fans, many of them whole families, into a positive vibe.

One thing that makes positivity easier for Mickey Guyton is not dwelling on social media or its negativity. “I’ve kind of dialed back from that,” the mom explains to the co-anchors.  Instead, she focuses on “what I see,” which is “all love,” over the tone of social media attacks. The focus on common community rings out in Guyton’s anthem, All American, rich with energy from the singer. As her closer for the entertaining set, Mickey chooses an old favorite, Rose, with cheers to the crowd.

Mickey Guyton truly made Today a festive salute to fidelity, family, and fun– all in four songs!

Stay connected with Country Music Alley for the latest on Mickey Guyton and all your country music favorites.