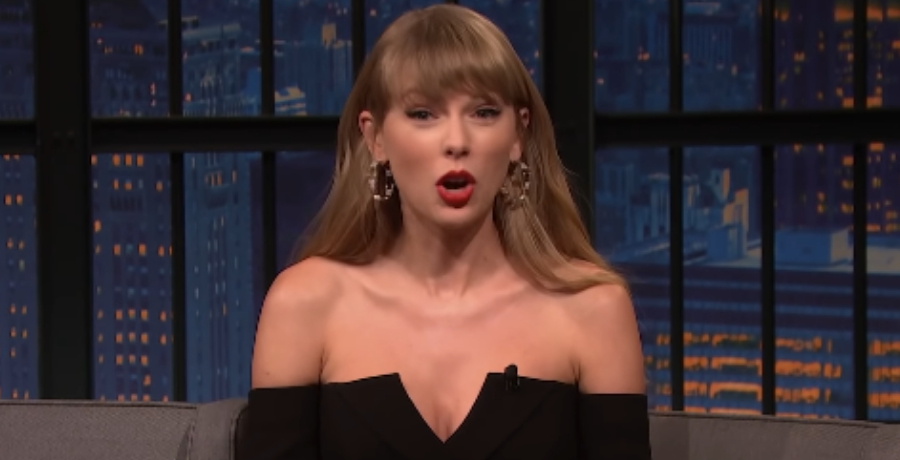 Taylor Swift’s Midnights release date made one pop star sweat. At the 2022 MTV Video Music Awards, Swift announced her tenth studio album. She admitted that this project has been in the making for some time. Midnights features 13 tracks that are inspired by “13 sleepless nights.”

Swift shared more news about the new album after the event. At midnight, she took to her social media accounts to share photos of the cover art and description for Midnights. She calls it a “collection of music written in the middle of the night, a journey through terrors and sweet dreams.”

What is Midnights about?

Taylor Swift has been sharing the details of this new album with her fans. It’s expected to be more somber in tone compared to the likes of Reputation and Lover. It might fall in line with Folklore and Evermore but could err on the side of country music. Some wonder if Swift will go back to her country roots on this album even though it has more of a ’70s folk singer vibe.

So far, no singles have been released. She’s only teased three of the thirteen tracks on TikTok. So far, the tracks include “Mastermind,” “Maroon,” “Vigilante S**t,” “Question?” and “Midnight Rain.” Unlike Folklore and Evermore, the songs on this album are taken from moments in her life. The “Cardigan” singer revealed what fans could expect.

“For all of us who have tossed and turned and decided to keep the lanterns lit and go searching — hoping that just maybe, when the clock strikes twelve … we’ll meet ourselves,” Taylor Swift wrote in her social media posts. “Midnights, the stories of 13 sleepless nights scattered throughout my life, will be out Oct. 21. Meet me at midnight.”

Aside from the regular release, there will be a deluxe version available at Target. Both the vinyl and CD will contain three bonus tracks. Swift unveiled the cover art which comes in four different colors: Blood Moon, Jade Green, Mahogany, and Moonstone Blue. If you turn them around, the album covers create an actual working clock.

Taylor Swift called out for her release date

During her speech at the VMAs, Taylor Swift said her new album will come out on October 21 — at midnight. Another singer’s album release comes at the same time. During her concert at Radio City Hall, Carly Rae Jepsen mentioned that her new album, The Loneliest Time, comes out on October 21. The Canadian pop star joked that it will be “will be easy to remember because it’s the ‘same day as Taylor Swift’s.'”

Carly Rae Jepsen trends as the internet reacts to her new album announcement while she played at Radio City Hall 👀 When announcing her album will be released on Oct. 21st she said it “will be easy to remember because it’s the “same day as Taylor Swift’s.” (🎥: @easyonnick) pic.twitter.com/NqoO5KarFm

In the new album, Jepsen explores the concept of loneliness. She was inspired to write and record the album during the COVID-19 pandemic. Jepsen says that loneliness “can cause some extreme human reactions” and she explores them all. Back in May, she released the first single “Western Wind,” and followed up with “Beach House” and “Talking to Yourself.”

THE LONELIEST TIME 💌 Oct 21. I’m quite fascinated by loneliness. It can be really beautiful when you turn it over and look at it. Just like love, it can cause some extreme human reactions.

What are your thoughts on Taylor Swift’s Midnights? Are you looking forward to the new album? What do you of the singer releasing at the same time as Carly Rae Jepsen? Sound off below in the comment section.