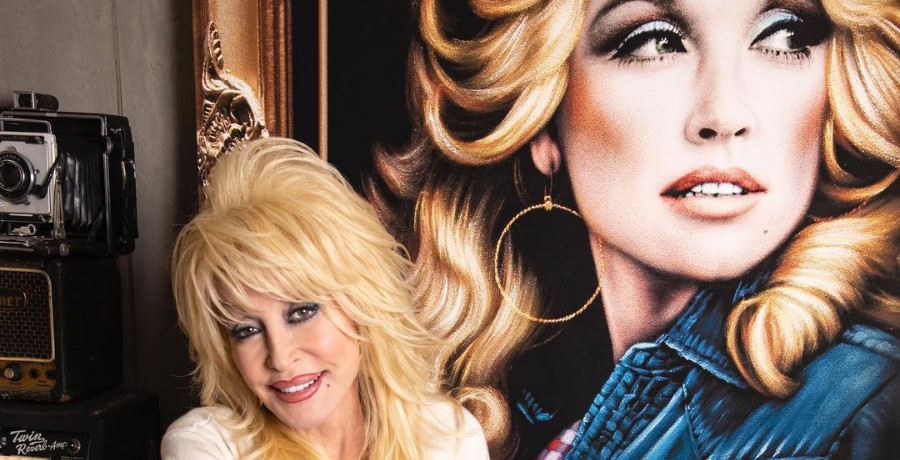 It comes as no surprise that Dolly Parton reminds everyone of blossoms in a spring garden this morning, May 12.   The country music marvel and philanthropic superwoman joins Robin Roberts of Good Morning America to share the good news of her Dollywood entertainment venue’s reopening in Pigeon Forge, TN, as Yahoo News and Fox News both confirm.

A wetter-than-normal spring shower tries to dampen the mood, but nothing dampens Dolly Parton’s delight in welcoming visitors to her beloved Tennessee attraction.  Last year, attractions opened only “on a limited basis.”  The “9 to 5” singer praises how all of her “family” working at Dollywood full together and adhered to all the health and safety protocols while still providing visitors with warm experiences and heartfelt service. Proving the point is Ms. Jonnie, there at Dollywood since its 1986 start, and still there this morning, raindrops and all.

Dolly agrees with the faithful Jonnie that no one takes a boss role, but instead, Parton creates a team of coworkers.  Whether it’s her band or her business, “We’re all partners here,” Dolly Parton insists.  “It takes all of us together to make it work.”

Dolly Parton is especially touched by the hard work of her entire team for this season’s Flower and Food Festival at Dollywood.  One beautiful display of blooms dedicated to her mother makes Dolly “very emotional” in the best way.

Dolly Parton never neglects to thank any friend.  She recently shared genuine, heartfelt words for Olympia Dukakis, applauding her Steel Magnolias co-star’s “quality” as a human being.  The closeness between the country music songwriting wonder and the veteran star of stage and screen came vividly across beyond the lines of dialogue.  Regardless of roots or heritage, Dolly draws everyone in as her extended family.

Robert Lee and Avie Lee (Owens) Parton live through countless Dolly Parton songs.   The loving daughter always has a remarkable story to tell, like the one that moved Stephen Colbert to tears, simply after a verse of “Bury Me Beneath the Willow” last fall.

Dolly Rebecca Parton extols her mother for the example of faith and strength that she consistently embodied for her 12 children.  Intrinsically, “Coat of Many Colors” is the eternal anthem to Avie Lee and her selfless devotion. Now, the song and its subject are designed in multicolor blooms, each like living tributes, greeting friends at Dollywood.

“There’s millions of flowers all over this Park,” Dolly Parton stresses.  Still, no blooms are as special as the ones that adorn the statue of her mother, sewing “every stitch with love” as the song relates.  The blooms cover the image, as shown in the GMA feature.  The flow of colors continues in a montage of brightly open umbrellas.

“I was really emotional” Dolly Parton confesses after seeing the tribute yesterday.  “I took lots of pictures,” she assures.  The reality in living color far exceeds what she saw in the brochure previews.

It was “very significant” for Dolly Parton to reflect on how that “little coat” has carried her so far along her “life of many colors,” as she describes.

Dolly Parton maintains her positive presence through the pandemic

“We’re not through it all yet,” Dolly Parton reminds concerning being free of pandemic health precautions, “but I do feel a new energy,” she tells Roberts.

Aunt Dolly didn’t get to spend a lot of in-person time with her numerous nieces and nephews, due to shelter-in-place restrictions.  Still, Dolly Parton found plenty of ways to keep positive and do what she loves. Her home studio allowed her to share the affirming “When Life Is Good Again” in the early, uncertain start of the siege last spring.  She revived her “Dolly-isms” on social media to lift spirits.  Dolly Parton even made the first pandemic-friendly Christmas album.

A Holly Dolly Christmas conveys the heart connection of the holidays across the miles with songs like “Christmas Where We Are” with Billy Ray Cyrus and the treasure, “You Are My Christmas,” a duet with her late brother, Randy Parton. Dolly focused on “unearthing love” in her 75th birthday wish.  Clearly, she’s still digging and loves the gifts from the earth.

Another passion that keeps Dolly Parton busy is her Imagination Library.  Robin Roberts highlights how 2 million books a month travel worldwide to mailboxes around the world.  The initiative now running for 25 years in honor of her father is nearing a total of 200 million total books mailed to children.

Parton frequently refers to her father as “the smartest man I ever knew” and she delights that he lived long enough to see the literacy endeavor thrive and touch so many young lives and families forever.  Robert Lee Parton never learned to read but his undying inspiration sparks tiny readers to this day.  “He got such a kick out of them calling me ‘The Book Lady,’” Dolly Parton verifies, and she savors every second of her virtual storytimes for children.  Hopefully, 2021 sees a few in-person readings with Dolly Parton and her favorite invited guests.

Dolly Parton is the epitome of a gracious Southern hostess, so naturally, she shares a recipe for Dollywood funnel cake.  Although viewers enjoy only a snippet on YouTube, Dolly graced fans with “Coat of Many Colors,” too.  Fortunately, neither the colors in her flawless makeup or her wardrobe were worse for the raindrops!

Happy 36th year for Dollywood!  Are you excited about the possibility of upcoming performances or summer plans? Leave a comment!   Tune into Country Music Alley for the latest on the stars and the music you love.