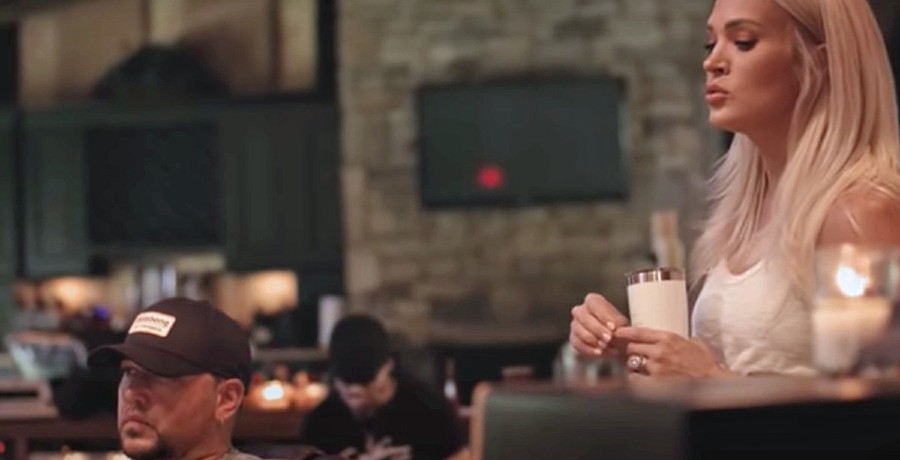 Carrie Underwood and Jason Aldean have something planned for fans. The American Idol alum is back to making country music again. This comes after the release of her first-ever gospel album. Last year, she released her first-ever Christmas album.

Carrie has been exploring different musical genres lately. Now, it looks like she’s getting back to her roots. On Wednesday, September 8, she teased her upcoming collaboration with Jason Aldean. The singer recently performed some of her hit country songs at CMA Summer Jam.

On Wednesday, Carrie Underwood shared a behind-the-scenes photo of herself with the country musician. She wore a striking turquoise blue strapless dress with an attached train. Carrie accessorized the look with a gold dramatic belt and turquoise ankle boots. Meanwhile, Jason Aldean stood next to her in his usual black leather jacket, gray T-shirt, and black jeans. He also had on his signature cowboy hat.

Fans are excited about the music video. Others are just excited to get some new music from their favorite country singer. Some were confused and mistaken Carrie for Jason’s wife Brittany Aldean.

There was also some backlash in the comments. One fan revealed that they used to like Jason until they found out that he allegedly cheated on his previous wife “with the one he’s married to now.” Still, they love Carrie and they look forward to the new song. Another fan wrote, “She Could have picked a better male vocalist.”

Carrie Underwood showed plenty of leg at CMA Summer Jam. She was one of the many headlining acts at the event that took place in Music City. The Oklahoma native performed a medley of her hits during the star-studded broadcast. Carrie performed “Church Bells” and “Last Name” to the packed crowd at Nashville’s Ascend Amphitheater.

During the show, Carrie also performed with country legend Dwight Yoakam. As Country Music Alley previously reported, Miranda Lambert performed alongside Dierks Bentley and Brothers Osbourne. Blake Shelton brought out his wife Gwen Stefani. There were a lot of surprise performances throughout the night. CMA Summer Jam aired on Thursday, September 2 on ABC.

Ladies and gentlemen, @CarrieUnderwood has arrived ⭐ #CMASummerJam on @ABCNetwork pic.twitter.com/pfX1QdgRCM

What are your thoughts on Carrie’s new song with Jason Aldean? Are you just happy to get some new country music from the singer? Share your thoughts below in the comments section. Check back with Country Music Alley for more news on Carrie Underwood.