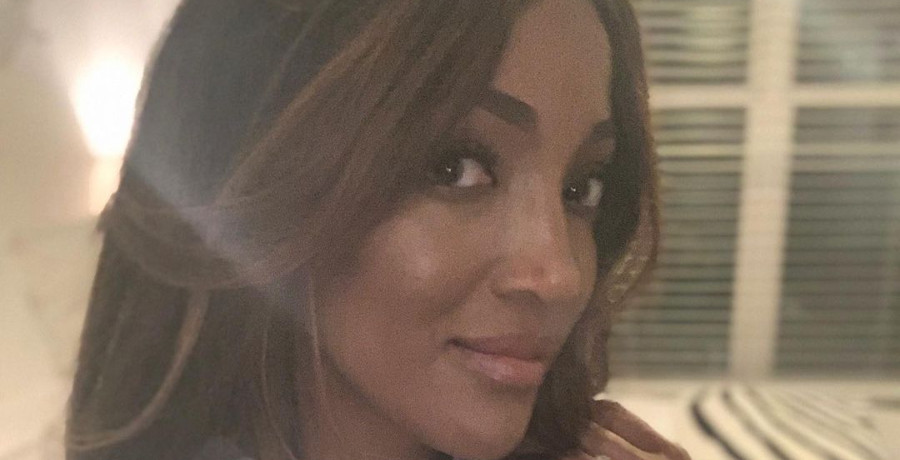 Without question, Mickey Guyton makes a statement with her songs and her passion wherever she performs. When it comes to the annual celebration of Christmas at Rockefeller Center, the Grammy nominee for Black Like Me keeps the date circled in red and green. The event means something special to Mickey Guyton just like it does to the thousands of faithful fans. They count the Rockefeller Center Christmas tree lighting as the start of their Christmas season.

Last year, Mickey Guyton marked the occasion of her Rockefeller Center performance all in red, and had the added glow of a Madonna for her 2020 holiday performances.  She was patiently awaiting the arrival of her now growing toddler, Grayson. Now, the devoted mommy knows how swiftly time flies, both at home and on stage. For certain, Mickey still makes a statement, wearing a striking new color for the season, and standing firm in faith.

Typically, red and green signify the Christmas color scheme, and the Christmas at Rockefeller Center show-opener for this 90th tree lighting, Gwen Stefani, certainly fell right into the Christmas colors of red and white dancing Santas and metallic silver for Santa Claus Is Coming to Town. However, Mickey Guyton made a statement with monochromatic purple.

Very likely, the Love My Hair singer-songwriter had not settled on her look for the NBC festivities when she was announced as a headliner by Billboard per MSN about two weeks ago, but by the time, Mickey Guyton took the stage for Jingle Bell Rock, she was a total stunner in the royal and meaningful shade. Her long coat had a pulled-thread texture from the collar to the bottom hem. Underneath, Guyton wore an exquisite lace blouse in the same purple hue, which also matched to her purple leather gloves.

At long last, this was a welcome back to the huge crowds for the holiday tradition, and Mickey Guyton never disappoints. Her characteristic mastery of the big notes blasted through on “Dancin’ and prancin’ in Jingle Bell Square IN THE FROSTY AIR” with signature Guyton gusto suitable for the perfectly nippy night.

Mama Mickey has a fun chat with the Muppets

No one except his daddy knows if little Grayson got to stay up to see it, but a little later, Mickey Guyton shared a delightful chat with the Muppets. Naturally, Elmo and Cookie Monster contributed their thoughts on the favorite elements of Christmas. Plus, a precious puppy added to the fun with his own furry yaps.

Of course, Mickey Guyton guided the conversation to less crumbly favorites of the season. Finally, Cookie Monster exploded with customary enthusiasm. He announced that “COOKIES!” are the ultimate treat for Christmas, with a shower of green cookie crumbs. No matter who Mickey Guyton shares a song or a stage alongside, it won’t match the wonder of the Muppets for her little boy.

#ICYMI: The Sesame Street family rang in the season at the annual Tree Lighting last night at #RockCenterXMas. The holidays are officially here! 🎄 pic.twitter.com/5yNQaeWNWZ

I Still Pray seals the special evening in meaning

As it happens, Mickey Guyton joined a superb roster of country music heavyweights for Christmas at Rockefeller Center this year. Along with Gwen Stefani’s hubby and favorite duet partner, Blake Shelton, Dan + Shay, Brett Eldredge, and Jimmie Allen added their own sparkle. Furthermore, there was Andrea Bocelli and his family, Alicia Keys, and Katharine McPhee, and David Foster.

Thanks to Mickey, an infusion of the true meaning of the season came from the first note of I Still Pray. Still wearing her purple attire, and backed by a gospel ensemble, the singer seemed transported to her time singing in church. The entire Rockefeller Center audience and anyone watching became part of the congregation.

“I just need some hope/I just need some peace,” the powerful, prayerful ballad pleads. Instantly, the tone and tenor of the evening shift from shimmer to a meditative spirit.  The power and honesty of Mickey Guyton’s voice bring impetus to its plea for the hurting, but also the plea of every human heart in the assurance that “I know you can fix my broken.”  “Wrap me in your arms till my heart unbreaks,” the lyrics implore. The gift of that bond between the Father and his child is priceless beyond any gift wrapped in shimmering colors beneath the tree.

Undeniably, Mickey Guyton crowned Christmas at Rockefeller Center with a gem of faith.

Keep tuned into Country Music Alley for the latest news on Mickey Guyton and your favorite country music luminaries!