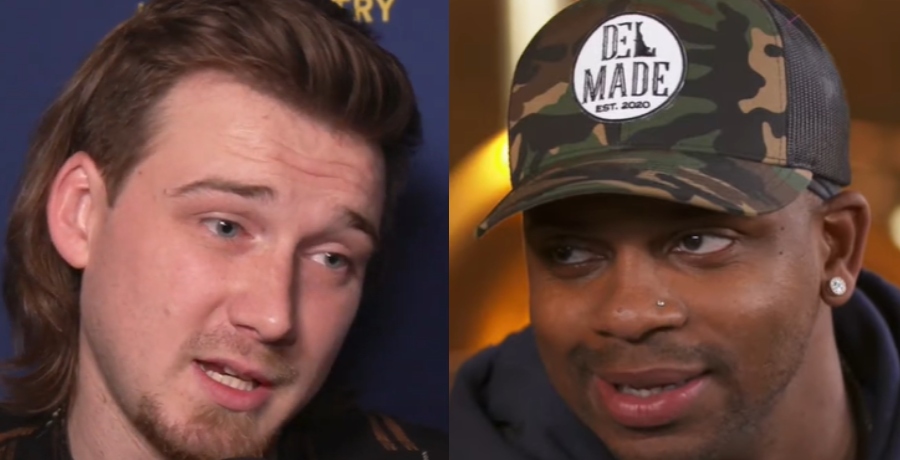 Country artists have recommitted to the need for awareness and diversity among their ranks in 2021. Maren Morris and Luke Combs specifically focused on this during recent interviews. But these conversations were ignited as the result of a video of Morgan Wallen using the n-word being aired. In the wake of the video the country music community sent a clear message of their disapproval. While some artists and outlets immediately worked to distance themselves from Wallen, others stepped closer. Jimmie Allen chose to reach out to Wallen and have a heart-to-heart about what happened.

Allen discussed their not one, but many conversations during his interview on BobbyCast. Jimmie told Bobby Bones that he “kept it a hundred;” he wanted Wallen to understand the influence he has in country music. “Now, you can be like man, ‘you shouldn’t say that bro, like it’s not a good look,’ you know what I mean, like don’t use that word it makes all white country artists look racist.”

Morgan Wallen made headlines everywhere in February when a video was posted by his neighbor showing the “Whiskey Glasses” singer using the n-word. At the time of the video, according to Wallen, he was working on a 72-hour bender. The singer received swift repercussions for his actions. His record-breaking double album Dangerous was pulled from radio and streaming services, as well as, the artist’s previous songs.  Since then, Wallen has apologized for using the term and asked people to not defend his actions.

Wallen took responsibility for his actions and acknowledged that he had a lot to educate himself about and work to do. Wallen posted a video on Instagram thanking members of the black community and leaders that reached out to him. These leaders offered to give Wallen the opportunity to “learn and grow” because he has a huge audience and can influence so many lives.

Allen explained that when he saw the video of Wallen he had a different reaction than most people expected. “Was I personally offended or upset when he said it? No,” and Allen went on to explain why.  “And the reason why and this is from me, being Black, talking to a bunch of Black people. First of all, the way he said it, he didn’t use the ‘-er,’ and it’s like okay, so that’s why a lot of Black people laughed and were like, ‘oh okay, well, he said it right.’ True, you shouldn’t say it, but at the same time just cause I don’t agree with what he said, doesn’t mean that I should banish him.”

Jimmie Allen took the time to process what was happening during the video. He took Wallen’s state of mind into account, his history, his music, and his movie preferences. Allen also considered what he personally knows about Morgan Wallen. Allen also told listeners some things that they may not have previously known about Wallen. “People don’t realize, Morgan Wallen listens to a lot of hip-hop, and that word is thrown around a lot, not making an excuse for using it but it’s like people ask their kids. Well, why do my kids know how to curse, cause they watch movies with cursing in it. They watch and hear you curse, so after a while, it’s subconsciously embedded into your brain to where it comes out, whether it’s hateful when it comes out or not.”

Allen specifically pointed out that racism is a heart issue. Morgan Wallen using the n-word is unacceptable but that is not his heart. “Morgan might’ve done this but I know a lot of great things that Morgan has done for Black people,” Allen explained.

Jimmie Allen has a bigger concern

Jimmie admitted that he was more concerned about what lead up to this video. He was upset that Wallen’s friends and colleagues saw him struggle for years but had done nothing to help. Wallen has had issues with alcohol in the past. He was arrested and charged with public intoxication and disorderly conduct in May of 2020.  Allen told Bobby that no one tried to help Morgan before when he was struggling. “There’s so many [things other than] just the n-word and I feel like everybody was focusing on that man, this is a guy. A fellow country artist, that we’ve seen struggling for years now. And no one cared until he said the n-word and no he’s been a person the whole time with problems.”

When Allen reached out to Wallen he told him, “‘Bro, whether you like this or not I’m inserting myself into your life because first and foremost man, you’re a father. You’re a father, you’re a person, how do we help you become a better version of yourself for your son?” Allen wanted Wallen to address his issues with alcohol, his outbursts, his reckless behavior. To Jimmie, those are the problems that need to be addressed.

Allen went on to say that there have to be consequences for people’s actions. He speculated that if Wallen had been forced to face those consequences earlier this situation may never have happened. Jimmie Allen said Wallen needs to “become a better person” and that this forced “time out” might allow for that. “[If] we can focus and make Morgan better. All the people that he’s influencing, they see his actions, they see his life, they see how he turned things around and they become better too.”

The backlash against Jimmie Allen

Bobby Bones asked Allen if he had been suffered any blowback over his reaction to Wallen, and Allen admitted he had. Jammie confessed he got bashed by both white and black people, but he was also supported. “I got supported and there was a lot of people in the hip-hop community that reached out to Morgan, a couple artists, a couple label execs on the R&B and hip-hop side reached out trying to find, how do we help you?”

Jimmie Allen also said his biggest issue was people being offended and making the situation about themselves.  “But when people start to use words like offended, the word offended is weird to me because my Grandfather taught me at a young age when someone says something to someone else, not directed at you that doesn’t affect you. The only way that you can become offended, is if you are so self-absorbed [that] you make something about you that’s not about you.”

The “Best Shot” singer admitted that he received worse criticism from white people than black. He talked about one person in particular. “I had somebody comment on my Instagram and was like ‘dude you can’t speak for Black people, you’re not even Black.’ And I was like what, I am Black. Just cause I don’t have the same view as every Black person does, doesn’t make me more or less Black. It’s just my view. It’s just how I choose and I don’t bash other Black people for their approach, that’s them, they have the right to do what they want to do because everybody views that situation differently.”

Treat each other with kindness

Jimmie Allen took his cues from Martin Luther King, who he reminded people forgave those that beat him. Allen asked how anyone can look at King’s example and still choose to hate and attack others. To sum all his feelings up Allen remembered a lesson from his grandfather. “I think it all comes down to, my grandfather is the most redneck straight forward dude, he said ‘the thing is people just need to mind their own damn business,’ that’s it. If people would mind their own business and just focus on you being a good person, you doing what you need to do and stop worrying about everybody else, we’d be good but all this comes from is everybody in everybody else’s business.”

Jimmie did not ask people to not have their opinions. Instead, he asked people to look at a situation and ask how can you make it better?